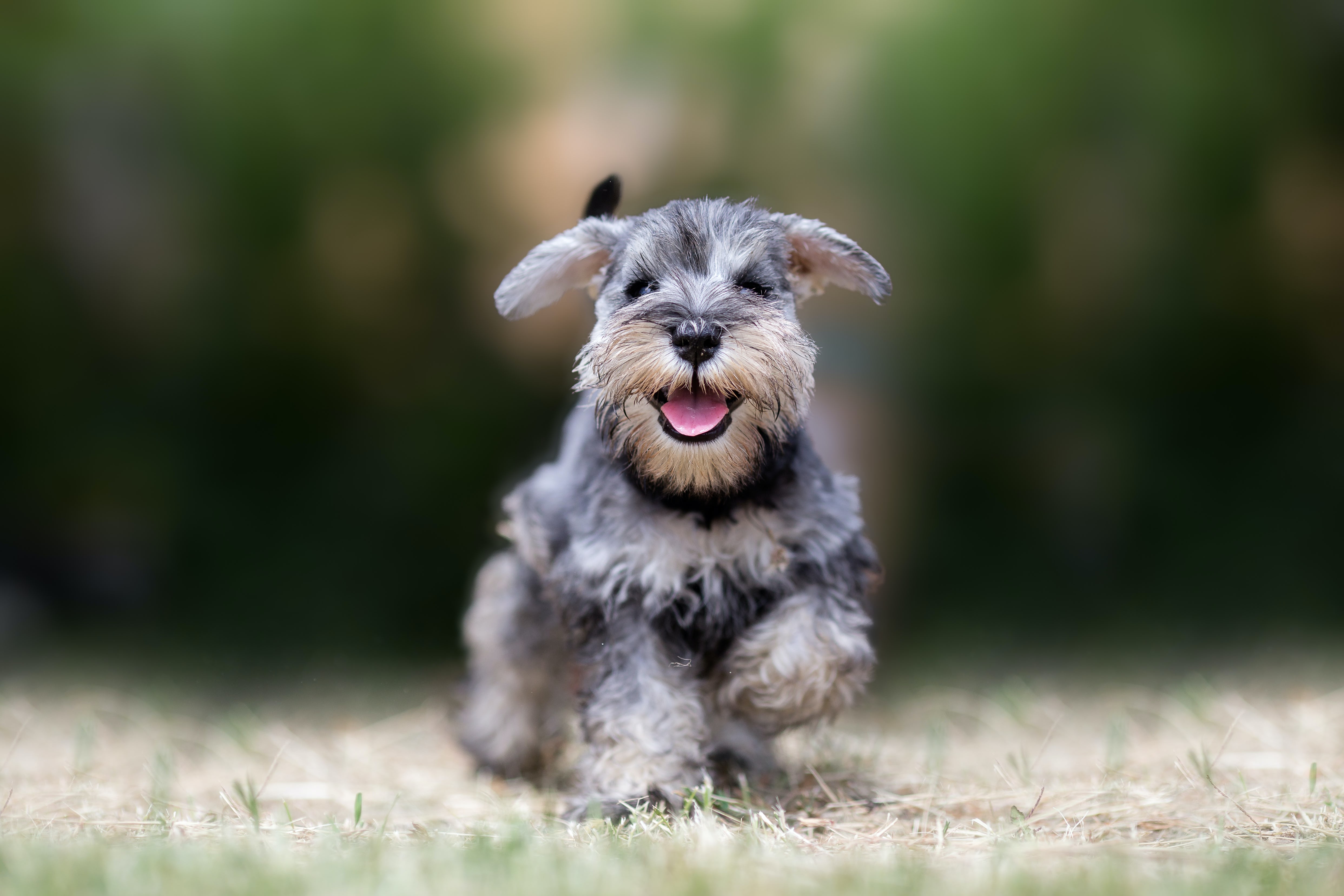 When a pup has hip dysplasia, it means that their hip joint is malformed.

Loss of function in joint due to deterioration. Complications during surgery.

Schnauzers are predisposed to Dilated Cardiomyopathy (DCM), a condition where the walls of the ventricle weaken and become thinner causing the heart to enlarge.

A giant schnauzer is more protective than its smaller relatives.

The mini schnauzer is a more affectionate pup. They enjoy playing and being with you.

All schnauzers need some form of mental stimulation. The larger schnauzer breeds would do well with a job to do.

Your schnauzer will enjoy things like agility training, guarding your home and family, or another job.

They have a distinctive look with their wiry coat, and they’re hard to miss.

It may help to make a game out of training or use treats.

If you’ve ever seen a medium-sized bearded dog, you’ve probably been looking at a schnauzer. They have a distinctive look with their wiry coat, and they’re hard to miss. They look like the kind of dogs you would expect to be owned by a duke.

Read on if you want to adopt one of these spunky little pups.

In the 1800s, they became show dogs in Germany, and they grew to be very popular. They were used in households as ratters or to guard the homes against potential thieves. During the first world war, they helped the Red Cross and served as dispatch carriers.

These talented and dignified working dogs can make a wonderful addition to any household. Of course, like any pet, they need care, which requires a lot of time and attention.

Here at Spot Pet Insurance, we understand how much time and effort goes into caring for your pup. So if you want to adopt a schnauzer, read on to learn everything you need to know to be a great pet parent to one of these lovable dogs.

What are the three types of schnauzer?

While all types of schnauzers look pretty similar, they have varying temperaments and come in three sizes.

The schnauzer we’ll be discussing the most is the standard schnauzer. They’re considered the oldest schnauzer breed, while the other two developed later as time went on. They’re in the middle, both size and temperament-wise.

The smallest schnauzer breed is the miniature schnauzer. They were born sometime in the 18th century due to a plan to have a smaller farm dog to hunt vermin. No one’s quite sure where their small size comes from, although it is thought they were bred with small poodles and the affenpinscher.

Read an article about the miniature schnauzer and their potential health issues here.

The giant schnauzer is the third breed. They’re bigger than the other breeds, and they were bred to help drive cows. They are the result of a mix of the schnauzer, sheepdogs, wolf spitz, wirehaired pinscher, poodle, Great Dane, and the Bouvier des Flandres.

What are the health risks for schnauzers?

Just like humans, dogs can get sick. While we hope that never happens to you and your pup, it’s best to be prepared by knowing what your pup can get and how to recognize potential symptoms. Breeders should screen for these conditions, but you still never know.

Fortunately, the schnauzer is one of the healthiest dog breeds. There are a few other conditions listed below, with more details on how they affect your pup, so you can be prepared.

Other potential health concerns for schnauzers

A few of those disorders are:

How do they interact with their families?

All schnauzers love their families, but some show it in different ways. A giant schnauzer is more protective than their smaller relatives. They are pretty energetic and enjoy hanging out with their family.

The mini schnauzer is a more affectionate pup. These little dogs aren’t inclined to be intimidating like their giant cousins, but they enjoy playing and being with you. As long as they have something to do with you, they’re great family dogs.

The standard is more like a combination of the giant schnauzer and the mini. Standard schnauzers are protective of their families, but they are also affectionate and loving. Like all schnauzers, they love to play with their loved ones.

Are they good with kids?

Standard schnauzers are also pretty good with kids. They will love any children who are part of their families, but they may be more reserved with strange children.

The main concern with giant schnauzers is their size. While they are good with older children, they aren’t the most gentle dogs, and they are pretty playful, so it’s better if they don’t play with smaller children.

How are they around other dogs?

Mini schnauzers are pretty laid-back about having other dogs around. They aren’t very aggressive, so they can easily get along with most other dogs.

Giant and standard schnauzers, on the other hand, are a bit more reserved around other dogs, especially new ones. Although they can get along with dogs that are a part of their family, they are more reserved and may be more aggressive towards other dogs.

It’s very important that your pup undergo proper socialization so they can behave well around other dogs. By introducing them to new people, places, and dogs while they’re little, you can prevent extreme aggression and antisocial behavior.

Do they do well with strangers?

All schnauzers are okay with strangers. They don’t love them, but a properly trained schnauzer will behave themselves around them.

Since they’re so small, a mini schnauzer won’t necessarily be aggressive, but they are more inclined to bark at a stranger than their larger cousins.

Schnauzers are smart pups. Miniature schnauzers can be sneaky, so they should have an eye kept on them. You might want to consider doggy-proofing your house.

All schnauzers need some form of mental stimulation. The larger schnauzer breeds would do well with a job to do. They make excellent watchdogs, can watch over any other pets you might have, or go through agility training.

Are they easy to train?

Some schnauzers can be more stubborn than others. Mini and standard schnauzers are the more difficult breeds, so they might require more innovative teaching methods than others.

Schnauzers can quickly pick up commands and tricks, so after they understand what you're teaching them, it’s best to move on to a new trick. Otherwise, they might become more unruly.

They have a wiry, double coat. Typically, they’re of medium length. The undercoat is very soft, while the wiry topcoat protects against water. They don’t shed very much.

What is the lifetime care cost of a schnauzer?

How to be the best pet parent for a schnauzer

All pups deserve the best. To be a good pet parent to a schnauzer, you have to be prepared to put in a lot of time and money. You should also be able to be firm, so you can help them learn the proper way to behave.

We’re here to help you become the best pet parent you can be. We know how hard it can be, especially if you’re new to it all, but hopefully, we can help by providing you with information. We can also provide a plan for your pet, so you have some help in case of an emergency.

What type of foods should a schnauzer never eat?

Part of keeping your pup happy and healthy is making sure they have the right kinds of foods in their diet. Although your dog can have many different kinds of human food, there are also a lot of foods that are toxic to them.

Some of these foods are:

Many other foods could be harmful to your pup, but there are also plenty of foods your dog can eat. You can learn more about some of them here.

Giant and standard breeds can go for a walk or run with you. Giants might even like going for a hike alongside you. They are ready for any adventures you might want to take them on. All schnauzers will appreciate playing fetch or maybe even tug-o-war, but you might not want to do so with a giant schnauzer.

Puppy: Birth to one year. Adorably small, the schnauzer puppy will begin its life journey by sleeping a lot and playing a lot. All that sleep means they have more energy when they’re awake.

Adult: 1 year to 10.5 years. Having reached adulthood, a properly trained schnauzer should be able to do whatever job you want them to.

Senior: 10.5 years to end of life. As your pup gets on in years, you might notice them becoming less energetic and sleepier. It’s to help them conserve energy and rest themselves after being really active for so long.