The savannah cat is instantly recognizable by its striking, Serval-like appearance and impressive size. Like the big cats of their namesake, living in the savannah grasslands, you’ll find this breed to still have the ancient instincts of its wild ancestor. They love to play, chase, and meow till the day is done. 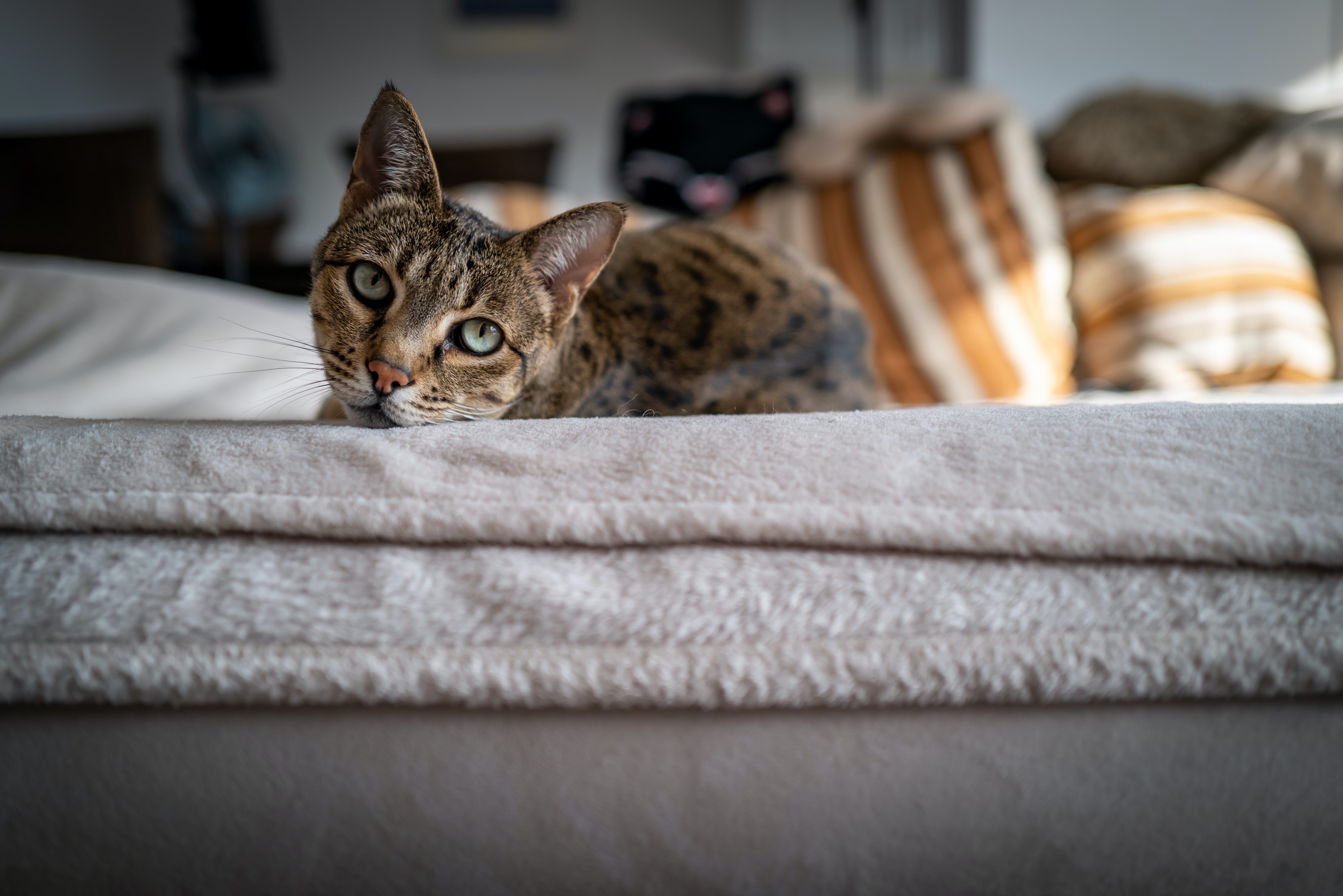 HCM (hypertrophic cardiomyopathy) is a cardiac disease that causes your cat’s heart to grow excessively, which can cause numerous issues.

No known treatments to cure or stop the disease.

Expect lots of running, jumping, climbing, pawing, playing, and even swimming, which is a breed favorite.

Savannahs are intelligent, and they like to keep their minds active all day.

They will show you plenty of affection in their own ways, including with their voice.

Their temperament could range from aloof to aggressive when it comes to strangers and other animals.

Talking is a favorite for these furry family members. Be prepared to hear chirping noises, as well as grunts and meows.

Short, dense coat, and many have a spotted coat as well. They look something like a small version of the cheetah.

No, the savannah breed is not hypoallergenic, although they do shed less than most other breeds.

Brushing once a week is advised for clean and soft coats.

With their energy levels and size, they need to move around and stretch their legs more than most cats, so a tiny apartment is not recommended.

These incredible, unique creatures are one of the newest, rarest, and largest domestic house cat breeds. While few are closely familiar with them, those who know them quickly form a bond with the breed and often find a new favorite breed!

Because of the savannah’s unique physique, instincts, and mind, prospective new owners have a lot to learn. That’s why we’re back again with another of our Spot Pet Insurance breed guides.

Today, we’re laying out everything you need to know about the savannah cat.

The first thing anyone will notice when meeting a savannah cat for the first time is their size and style.

Savannah cats are the world’s tallest domestic cats, often rivaling small and medium dogs in size (depending on their generation). They also have a striking coat, slender body, long legs, gorgeous eyes, and large ears.

The personality of the savannah cat is nearly as wild as its looks. These cats are active and intelligent, so they need lots of stimulation. Territorial instincts and prey drive contrast a deep affection for their family. An owner who can meet their needs will find a very affectionate and playful companion.

Where does the savannah cat breed come from?

The name, appearance, and temperament all lend significant clues about where these cats came from. Their ancestors are wild cats from the savannahs of Africa!

What may be more surprising is how the first savannah cat (sometimes called the savannah house cat) came to be.

In the 1980s, a cat owner had welcomed an African Serval cat into her home temporarily along with her Siamese cat. When her Siamese later had a kitten that resembled the Serval, it was (needless to say) quite a surprise!

This same kitten grew up and had kittens of her own with another domestic breed. Within less than a decade, enthusiasts and reputable breeders, including Patrick Kelley and Joyce Sroufe, worked together to multiply these unique cats, eventually leading to a new breed standard.

By the early 2000s, savannah cats were recognized by the TICA (The International Cat Association), along with other hybrid cats like the Bengal cat. Currently, permitted outcrosses include the Ocicat, the Oriental shorthair, the Egyptian Mau, and the domestic shorthair.

Today, the savannah cat is still exceedingly rare compared to most domestic breeds. Still, it thrives in homes worldwide thanks to early breeding efforts and responsible savannah cat owners.

What are the potential health conditions for savannah cats?

Few domestic cat breeds, if any, are healthier than the savannah cat, both in general and in terms of inherited health problems or predispositions.

Conditions that might affect any breed could still occur with this breed. Thankfully, there aren’t any major issues to worry about that are common with the breed.

There is one exception in terms of the breed’s liver. In some cases, their liver does not grow enough to keep up with their large bodies. Because of this, savannah cats should not receive ketamine at any time, such as during care at a veterinarian.

Are savannah cats affectionate with family?

Savannah cats become highly affectionate with their owners in most cases, sometimes even earning themselves the title of “velcro cat,” indicating a level of clinginess.

The high levels of affection in this breed come with high levels of need. Make sure you’re ready to give your savannah plenty of attention and playtime, or else they will find a way to get your attention (and you might not like how they do).

These are some of the most intelligent and clever cats you can find.

Savannahs learn with ease and even pick up on complex behaviors, including opening doors and operating other contraptions (including alarm clocks, in some reports).

There are pros and cons to high intelligence breeds, and the savannah is no different. Training and leash-walking are very attainable, and playtime can be very involved and fun! At the same time, be prepared to cat-proof certain parts of

Do savannah cats do well with children?

Cohabiting children and savannah cats can easily get along and often thrive together. The key is knowing both your cat and your children.

Ensure your children know how to properly interact with a cat, especially a large and athletic cat-like early generation savannahs.

How are savannah cats with strangers?

Strangers can be a challenge for savannah cats depending on their generation and how much they’ve been socialized. In most cases, you can expect a bit of standoffishness when strangers are around.

Do savannah cats get along with other pets?

In general, savannahs don’t have any issues with other cats. When it comes to different animals, things can vary.

When it comes to dogs, early generations (F1-F2) experience some challenges interacting. Later generations (F3+) have similar temperaments to most dogs and form playful friendships with them in many cases.

Smaller animals, such as birds, pose more of a problem since the savannah cat has a strong prey drive across all generations.

How to be the best pet parent for a savannah cat

Savannah cats are a unique breed with some special needs. Understanding where they come from will give you a deeper connection to their instincts and their body, setting you up for success when it comes to pet parentage.

Learning is a lifelong venture for a parent of a savannah cat. You can find tons of resources to help with the process at our Spot Pet Insurance Blogbowl!

Let’s talk about some other factors to know in regards to caring for a savannah cat.

How much does a savannah cat cost?

Basic training and behavior etiquette for your savannah cat

Training a savannah cat is often compared to training a dog due to its unique personality and intelligence. Everything from leash training to toilet training is possible with time and patience when it comes to this breed.

Here are a few tips to help you train your savannah:

What types of foods should savannah cat never eat?

As with all cat breeds, certain foods should be avoided due to toxicity for your pet. Keep these foods securely inaccessible to your savannah (and remember, they can learn to open doors). Cat food is always the best option for your pet.

Savannah cats are extremely active and need plenty of exercise every day. They can certainly entertain themselves (and will), but this breed also loves to be with their owner. You can and should play with your cat and exercise them every day!

Savannahs have been compared to dogs due to their propensity for leash-walking and even playing fetch! It may take some time to gradually train towards these behaviors, but unlike some other cat breeds, it is possible.

Toys are also a great way to positively channel your savannah’s energy, and towers or other places for them to climb, jump, and hide throughout your home are a must.