One of the more famous fluffy dogs, the energetic Pomeranian has a big personality contained in a tiny body. They are spunky and ready to take on anything. Poms are also intelligent, loyal, and playful, so they can be pretty easy to train unless they are being stubborn. 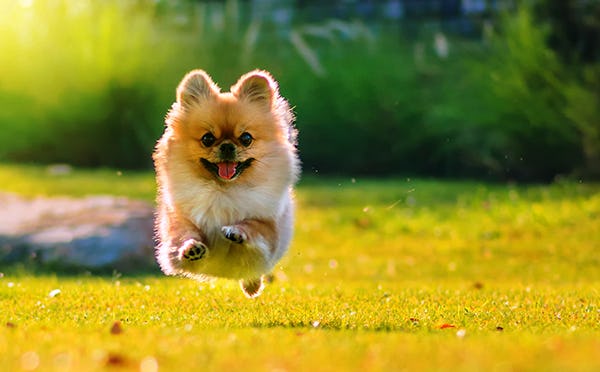 Patellar luxation occurs when the kneecap (patella) displaces itself.

Sudden lameness, skipping (holding one leg up while walking), and kicking the leg out.

If your pup is overweight, patellar luxation might be more difficult for your dog to handle. They also shouldn’t climb stairs or try to jump onto furniture.

Tracheal collapse is a condition where your dog’s trachea collapses, which will cause difficulty breathing.

If your dog’s trachea collapses, heat and humidity make their breathing problems worse. If your dog is overweight, it can also affect the severity of tracheal collapse.

Entropion is a genetic condition that causes the eyelids to fold inwards so that the eyelashes are rubbing against your pup’s cornea.

Surgery to remove part of the eyelash

If entropion is not treated soon, it can damage the cornea by continuing to irritate the eye. If there was scarring on the cornea due to entropion, it needs to be treated to prevent further visual damage.

If there’s one thing a Pomeranian loves to do, it’s play. They’re too small for games that require roughhousing (although they might think otherwise), but games like fetch or even agility training can help them get the daily walks they need and have fun.

Poms are extroverted and have lots of energy for their small size, so they need to have plenty of exercise. Fortunately, there are many fun things that you can do with your Pomeranian, from taking a walk to playing a game of fetch.

Pomeranians are pretty smart pups, so they can learn tricks quickly, as long as they are in the mood to participate. They need plenty of mental stimulation, so you might want to try to come up with inventive ways to teach them tricks and not repeat each one too often once it’s mastered.

Pomeranians might be small, but that doesn’t affect their belief that they could take on anyone in a fight. They aren’t likely to challenge another dog, but they have a tendency to be cocky. They enjoy new adventures, so their bravery isn’t only when it comes to other dogs.

If you own a Pom, the only people in the world that they would want to hang out with are you and your family. They don’t enjoy meeting new people, so it’s important to give them socialization from an early age to get them used to the idea of strangers.

No, Poms are not hypoallergenic.

Poms should be brushed at least once a week. Their nails should be trimmed regularly, and their teeth and ears need to be cleaned frequently.

Pomeranians can be stubborn, but if you use positive reinforcement and moderate amounts of treats, it should be easier to train them. It is difficult to housebreak them, though.

If you’re looking to bring a little sunshine into your life, consider adopting a Pomeranian. These adorably fluffy dogs have great personalities, although they can sometimes be bossy.

They’re small dogs who think they’re bigger than they are, but that’s not really a bad thing. It just means they’re exuberant and ready for a challenge, so if you adopt one of these lovable pups, you’ll need to keep an eye on them.

Adopting a new furry friend is a difficult task, but we at Spot Pet Insurance are here to help. We may not be able to help with the physical side of things, but we can help you prepare yourself to bring a pup into your home. After all, one of the key ingredients to being a good pet parent is knowing your pet.

Hopefully, with the help of our educational resources, you can learn more about your pup.

The history of the Pomeranian

Pomeranians (known as Zwergspitz in Germany) are descendants of the dog families known as spitz breed dogs, the same family that corgis, German spitz, Norwegian elkhounds, and samoyed are said to have come from. All spitzes have fluffy coats, tails, and tiny ears to help protect them from the cold.

Today’s Pomeranians are a small toy breed, but earlier versions of this pup were much bigger, weighing around 30 pounds. However, they still had the same fluffy fur and tails.

Pomeranians get their name from the Pomerania region of Germany and Poland. As time went on, their popularity grew throughout Europe. They were even the first dogs to live in Buckingham Palace in England after it was finished.

In the early 1900s, the American Kennel Club accepted them as an official breed. Although they weren’t popular initially, the Pomeranian fanbase quickly grew until they became one of the top ten dogs in the United States.

Pomeranian: An introduction to the breed

Purebred Pomeranians are considered toy dogs, even though they usually have the attitude of a much larger dog.

Dogs of this small breed have long double coats with an outer coat and undercoat, so they are very fluffy, which makes the nickname Pom even more suitable. Depending on the cut, their fur can have a rounded appearance or look lion-like.

Their plumed tails are curled, and their tiny ears stick up, giving the Pomeranian a perky appearance. Just looking at a Pomeranian could brighten your day.

Pomeranians are usually an orange or reddish coat color, but there are many other colors they can be. They can also have a lot of different markings, like white markings, masks, or sable. Some poms have parti-color coats.

What kind of grooming does a Pomeranian require?

Since they have a double coat, they should be brushed at least weekly with a slicker brush and a pin brush. It’s also a great idea to find a groomer to help you maintain your Pomeranian’s coat.

Pomeranian puppies and adults alike make excellent companion dogs, and they can be great in lots of different homes. They get along well with young children, although it’s important to make sure your child plays with them gently and responsibly, so it’s a good idea to keep an eye on them while they play.

They love their families, but they are shy around strangers. They also aren’t partially big fans of other dogs. They are wonderful watchdogs, though. They love to bark to warn you, and they’ll sometimes bark just for fun. They are vocal pups.

What kind of exercise do Poms need?

Pomeranians need some kind of activity to help them manage their energy levels. You could take them on a walk or play games with them, like tug-o-war or fetch. They do have a knack for escaping, so it’s important to keep an eye on them if you let them out to play in the yard.

It’s also good to give them some mental activities to keep their minds active. All Pomeranians should be trained to walk with a leash and other basic obedience commands. They’re also good at agility training, rally, or even being therapy dogs.

What are some other things you need to consider when adopting a Pomeranian?

Although Pomeranians are great little guys to have around, there are some things you need to be aware of before you adopt one.

As we’ve mentioned before, Pomeranians are pretty little dogs, which means you need to be pretty careful with them. They can’t really rough house with either dogs or kids, and they are potential targets for predators, including birds.

Your Pomeranian being picked up by a bird is pretty unlikely, but it’s still a good idea to keep an eye out. If you have a yard, you will want to doggy-proof it since Pomeranians are excellent at finding ways to escape.

What are the potential health conditions for a Pomeranian?

It is an unfortunate fact of life that your pup can get sick. It may not happen, but it’s best to be prepared for any possibility. It is also possible for your pup to develop a hereditary condition.

For example, patellar luxation is a common concern for Poms. It’s unstable, so it luxates (moves) either too far up or down (vertically/laterally) or horizontally (medially). How the kneecap moves depends on the reason for the patellar luxation.

Sometimes your dog’s knee cap will become displaced because the femoral groove is too shallow. Other potential issues could be a malformed femur or tibia.

Although the cause of patellar luxation could be an injury, it’s also very common to see patellar luxation in dogs without injuries, so it appears that a gene can cause it. The particular gene hasn’t been discovered yet, but it can be an inherited condition.

The most likely theory is that there is an issue with the cartilage and the way it fuses with the trachea, which then causes structural problems. The collapse begins at the top of the trachea.

It becomes flat, which then causes your pup to have problems breathing. It is treatable, but depending on the severity of the collapse, it may not last more than a few years.

Other potential health conditions for Pomeranians:

Entropion Surgery for Dogs Cost - in 2022 | The Pricer