Descendants of Siamese cats mixed with other breeds of cats, Oriental shorthairs are social, intelligent, and affectionate domestic cats. They love their family members and prefer to have a companion at all times. Orientals are talkative cats, although they aren’t as demanding as the Siamese. 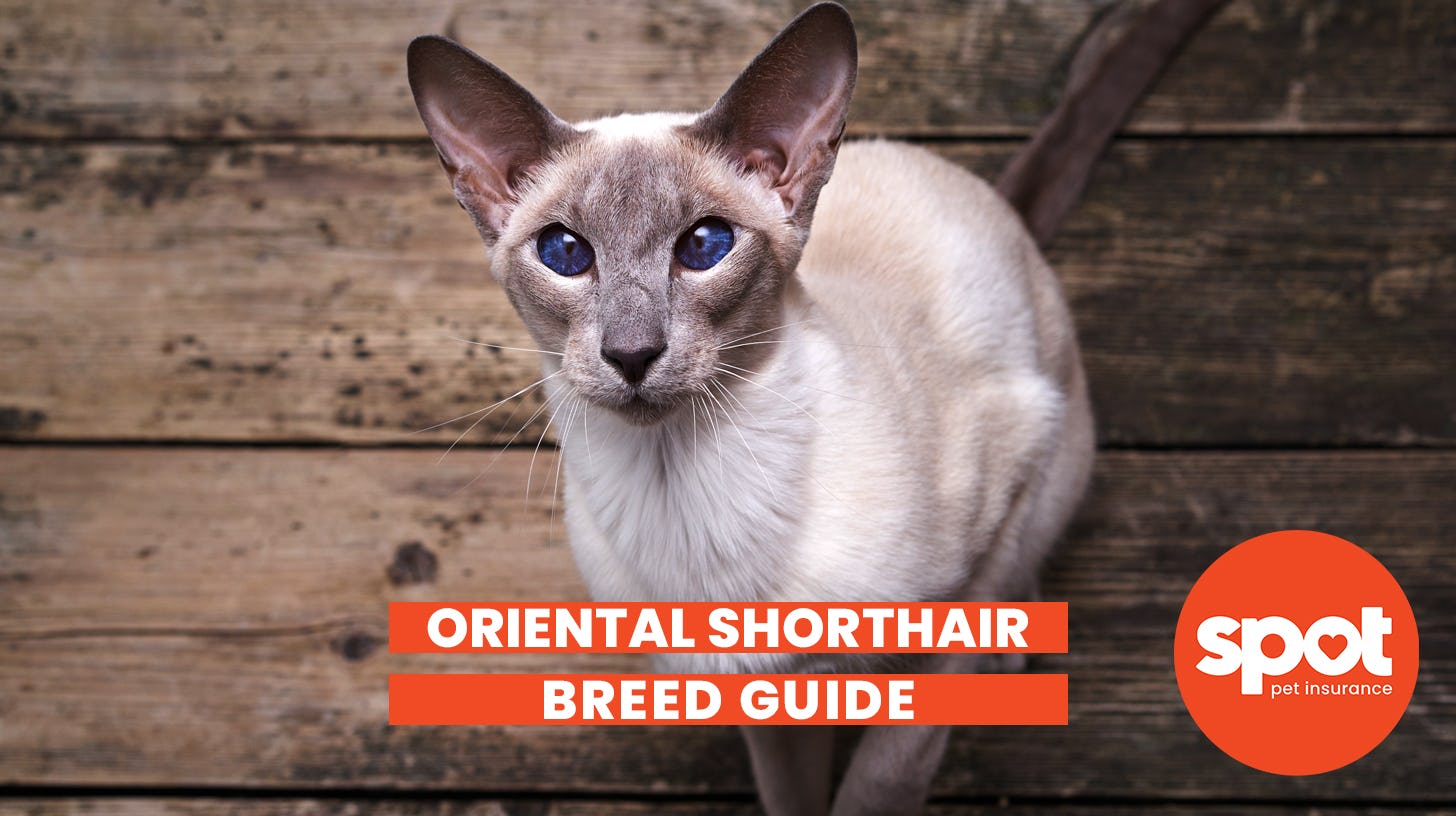 Progressive Retinal Atrophy (PRA) is a hereditary disease where your cat’s eyes are genetically programmed to eventually go blind.

Oriental shorthairs are known for frequent vocalizations, but they have quieter voices than their Siamese relatives or the American and British shorthair. They might express their opinions with meows on some things, but Orientals aren’t as bossy as the Siamese breed.

Orientals love making new friends and being entertainers, and they hate being alone. It’s best not to leave your Oriental by themselves for too long unless they have another cat or person as a companion to hang out with.

Many cats seem aloof, but Oriental shorthairs are very loving and affectionate. They have too much energy to spend a lot of time on your lap, but the more love you show to them, the more they will lavish you with affection.

Like all cats, the Oriental breed sleeps for long periods, but they need much more mental and physical exercise than some other breeds when they are awake. You could leash train them to take them for a walk or get them a toy for them to chase.

No, Oriental shorthairs are not hypoallergenic cats.

Oriental shorthairs only need to be brushed occasionally, although their nails should be clipped and their teeth and ears cleaned regularly.

Oriental shorthairs have sweet and friendly personalities, and their sleek build combined with their triangular face and large ears gives them an elegant and dignified appearance. They often have green eyes or blue eyes and a medium-size tubular body. As energetic cats, Oriental shorthairs are excited to entertain.

We’re here to help. Here at Spot Pet Insurance, we think the best pet parents are prepared for their pets before they even arrive.

Learning about your pet’s habits, personality, and needs helps determine whether you and your future pet could be a good fit. Once you’ve figured that out, you and your pet can have great times together. We also provide educational resources to provide you with other tips and tricks for you and your pet to try.

Oriental shorthair: An introduction to the breed

Oriental shorthairs are very sleek and slender cats, but they can weigh more than you would expect by just looking at them. These elegant cats have large ears, and their heads are triangular, giving them an interesting and dignified appearance.

One of the reasons for the existence of the Oriental shorthair is that people wanted a cat that was similar to a Siamese but had more variation in color. As a result, there are over 300 possible colors and patterns for an Oriental shorthair.

Their eyes are usually blue or green, but they can also be odd-eyed. Odd-eyed is the term for a cat’s eyes being two distinct colors.

What is the history of the Oriental shorthair?

The Oriental shorthair is technically a Siamese mix. Siamese cats were very popular and revered in Thailand, so no one attempted to alter their appearance. However, once they made their way to Britain and America, people were interested in having more color variations in the Siamese cat.

To achieve their goal, breeders in the mid-1900s began to mix Siamese with Russian Blues and British or American Shorthairs. In America, they also bred the Siamese with Abyssinians.

These mixes produced the Oriental shorthair and the Oriental Longhair. They kept the sleek, wise look of the Siamese cat while gaining more colors and some distinctive features of their own, like larger ears and more angular heads.

They were initially called Foreign Shorthairs in America, but the name was changed in the 1970s. Even though Siamese breeders were initially wary of the new breed, Orientals grew in popularity fairly quickly.

The Cat Fanciers Association  (CFA) accepted the Oriental as a registered breed in 1972, and it quickly gained championship status. In current day cat competitions, the Oriental category consists of both Oriental shorthairs and Longhairs.

Do Oriental shorthairs do well alone?

Oriental shorthairs are great cats, but they aren’t without their faults. They love being around you, but if they don’t get enough attention, they can develop depression. It’s also possible for them to get separation anxiety.

It’s best to help your cat get used to you being gone for short periods from when they are kittens capable of being on their own. It’s a good idea to do this gradually, but you still shouldn’t leave your cat alone all day unless they have other companions, whether it’s another cat or your significant other.

Without attention, Oriental shorthairs are pretty grumpy, and they are easily offended. However, if they receive the attention they deserve, they will give you all the love and affection they can.

Fortunately, Oriental shorthairs get along with pretty much anyone. They’re pretty social cats, as long as they are respected. They do well with other cats, kids, and even dogs, as long as the dogs are accepting of cats.

While Oriental shorthairs can get along with any children you might have, it’s a good idea to keep an eye on them as they play. You need to ensure that your children are being gentle, and your cat may become irritated if they are not treated gently.

Even though they can get along with pretty much everyone, Oriental shorthairs tend to pick one person they decide to spend most of their time with.

What health conditions are Oriental shorthairs prone to?

Progressive retinal atrophy is common in this breed. Some cats may have a less severe case than others, but it usually ends in complete blindness.

Unfortunately, it isn’t a curable disease since it’s part of the cat's genetic code. The PRA trait is recessive, so even if you have two cats that don’t suffer from the disease but carry the gene, there is a one in four chance that a kitten will end up with PRA.

The disease usually starts with difficulty seeing at night and then progresses until your cat is fully or partially blind. You can get your cat tested for PRA by doing a genetic test.

They are also prone to bladder stones.

It’s an unfortunate truth that our pets can get ill, just like we can. Cats can also have hereditary conditions, which are passed down to them through their parents. While all this might seem scary, most issues are usually rare.

If your pet does end up with a hereditary condition, Spot Pet Insurance has you covered. As long as the condition isn’t pre-existing, we can help reimburse you for eligible visits to your vet to help your pet live with a better quality of life.

What kind of grooming do Oriental shorthairs need?

Oriental shorthairs only need to be brushed occasionally. However, since there is a longhaired variant of the Oriental shorthair, depending on the one you adopt, they could require more regular brushing.

What Are Similar Breeds to the Oriental shorthair?