These round-bodied, often short-tailed felines are renowned for their distinct appearance but also their balanced, easy-going personalities. Those looking for a cat full of love but low on maintenance will quickly fall in love with the Manx cat’s traits. 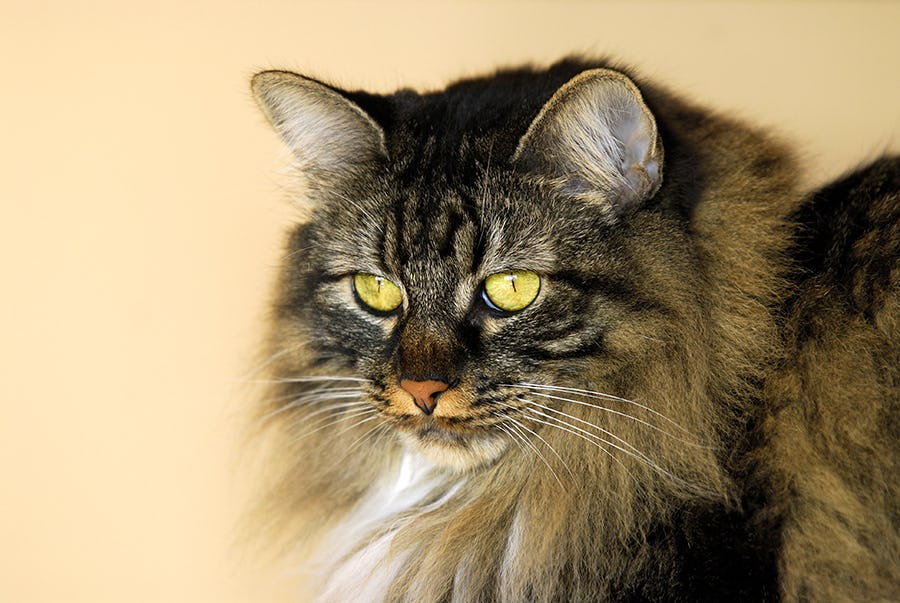 Manx Syndrome includes a variety of issues, most notably neurological diseases like spina bifida, caused by the vertebral genetic mutation that leads to short or tailless cats.

Lifelong conditions with no cure – can be fatal for some cats by a young age.

Hypertrophic cardiomyopathy (HCM) is often inherited from a cat’s parents, and while Manx cats are nowhere near the most at-risk breed, they can still be affected.

Sadly there is no known cure.

Manx cats have a laid-back temperament that makes them easy to care for and get along with overall.

These house cats enjoy being around people and need plenty of attention, whether from their favorite family members or new strangers who visit your home.

A strong intelligence lies at the heart of these cats, although they are typically not a risk for much mischief (like some intelligent breeds).

Manx cats like to play actively with their family but can also entertain themselves as long as toys and climbing infrastructure are provided.

Plenty of love will be shown by a Manx cat to its family, especially to their favorite family member (often the one that feeds them).

Manx coats come in a shorthair or longhaired coat variety but have a double coat in either case. Additionally, another type of cat, the Cymric, is sometimes considered a semi-longhaired Manx variety and not its own separate breed. Colors and patterns of Manx cats vary widely and can include calico, tabby, tortoiseshell, and nearly every other common color combination.

These cats have a thick double coat (whether short or long) that requires regular grooming regardless of coat length. Groomers recommend that Manx cats be groomed once a week for shorthaired individuals and two or three times a week for longhaired ones. Nail trimming and dental cleaning should also be regular.

Training is received well by most individuals, although some are known for having a strong will. Their intelligence and love of people aid in the process. Some cat breeds can be difficult to distinguish from others, especially when only subtle differences can be seen. The Manx is not such a breed.

Not only do Manx cats have a distinct physical build, being round from head to toe and typically squat, with thick bones and muscular hind legs, but they are also infamous for their unusual tails: either non-existent or short or stumpy. Some Manx do have full tails, but even then, their build may give them away.

While their appearance may be striking, these cats also have wonderful personalities. If you’ve been smitten by the cuteness of the Manx, today’s Spot Pet Insurance guide is the one for you!

We’re talking about the Manx and the crucial information you need to know before bringing one into your family.

Whether shorthaired or longhaired, tailless or full-tailed, any Manx cat is undeniably going to be cute. Its round head, stout body, and broad chest give it an endearing look.

Thankfully, their easy-on-the-eye appearance is matched by an easy-going personality. This medium-sized cat breed is most famous for having short tails or a complete lack of a tail, but what truly makes them beloved is their temperament.

Read on to learn about the Manx breed’s history, health, temperament, instincts, training, grooming, exercising, and more! By the end, you should be able to decide if this is the breed for you.

Where does the Manx cat breed come from?

There is some amount of debate around the origins of the Manx breed. There’s even some mythology and legend, too. While not appearing in the Bible, one legend has it that the Manx cat lost its tail by being a little late to board Noah’s ark.

However, most scholars agree that the Manx cat breed originated on the Isle of Man, an island in the Irish Sea between the United Kingdom and Ireland.

Over a millennia ago, Celts who spoke a language called Manx inhabited the island. However, it was likely only a few hundred years ago when the feline ancestor of this breed was brought to the island from England, Wales, Spain, or possibly a Nordic nation.

Thanks to the island’s small size, the short-tailed gene (an incomplete dominant gene) spread and became prevalent in all the local cats.

What are the potential health conditions for Manx cats?

As a breed with a long history, Manx cats are generally healthy with few genetic predispositions to be aware of.

As with the entire cat population, certain conditions like hypertrophic cardiomyopathy are always a risk. Breed-specific conditions also exist resulting from the tailless genes some Manx cats inherit. These include Manx Syndrome, corneal dystrophy, and megacolon.

While the cuteness of the stubby short-tailed or tailless Manx is one of the breed’s best qualities, the unusual tail length can, unfortunately, come with serious downsides, including Manx Syndrome.

All Manx cats are at risk of developing these conditions during their lifespan. That means it’s essential that breeders test new Manx kittens — including those with a normal-length tail (“longy”), a partial tail, or even just a tail bump (a “rumpy riser”) — for Manx Syndrome so you can be aware of any issues they may have.

Are Manx cats affectionate with family?

With most traits found in the Manx cat breed, there is a wonderful balance. Manx are affectionate cats that enjoy attention, sometimes seeking it out actively, and will demonstrate their love physically and vocally. At the same time, they aren’t typically clingy, demanding, or needy in the way a “velcro” breed might be.

Owners who must leave the house for a work shift or enjoy focusing on their hobbies through the evening will appreciate the Manx’s ability to entertain itself or be satisfied relaxing alone.

Thankfully, this never becomes excessive – if and when you are ready to give your Manx some attention, they will eagerly receive it.

It should be noted that Manx cats often choose a favorite member of the family (most usually the one who gives them food) and bond with them most closely. However, this varies widely by individual. Plenty of Manx cats are affectionate with their whole family.

This is certainly an intelligent breed that can learn quickly (and typically does so willingly). In fact, some Manx cats learn to open doors and cabinets.

Anytime you have an intelligent cat, they usually require plenty of mental stimulation that lets them draw on their instincts.

While this need does exist for the Manx, it is relatively tame compared to other intelligent breeds because they are so mellow and even-tempered overall. The easiest way to tend to a Manx mental needs is to provide plenty of toys and some climbing infrastructure.

Do Manx cats do well with children?

Manx cats can do quite well with children, whether kids are visiting or you have children in your family sharing a home with Manx cats full time.

There are, of course, some vital things to keep in mind. Even though Manx cats are naturally friendly, socialization is still important for training them properly. Without socialization from a young age that involves human children, a Manx might be less receptive to them as it grows older.

Equally important is to prepare your child for interacting with a cat. Teach them not to corner a cat, chase it, or make excessively quick and forward movements (such as lunging to pick a cat up), as well as other respectful behaviors.

Once your cat and child are ready for the encounter, supervision is still a necessity for the safety of all parties involved. Thankfully, this process is almost always smooth and easy, thanks to the friendly, mellow demeanor of the Manx breed.

How are Manx cats with strangers?

Introductions to strangers should be gradual and respectful. With this approach, Manx cats are almost always receptive and friendly.

Some individuals might be more open to strangers, while others (usually the ones who have a favorite in the family) are less interested.

Do Manx cats get along with other pets?

Manx cats typically mesh with other pets well. Due to their easy-going temperament, introducing a new pet should be gradual but is otherwise easy. Even if the other animal is typically nervous with cats, they may fare better with a Manx than with other less-mellow breeds.

How to be the best pet parent for a Manx cat

Caring for a Manx cat (or a cat of any breed) is a privilege and responsibility – one that requires a certain level of understanding for cats.

At Spot Pet Insurance, we’re here to help you build that understanding! We write breed guides like this one to help get you started, and you can find many more resources in our Blogbowl.

You can also learn about pet insurance through our FAQs and insurance comparisons to see if Spot Pet Insurance could be a good fit for you.

Let’s talk about a few more areas related to the Manx breed that potential owners should know about.

How much does a Manx cat cost?

Basic training and behavior etiquette for your Manx cat

Training a cat is never quite the same as training a dog. The first thing to know is that most cats are not entirely enthusiastic about training as they tend to be independent creatures that like to do things their own way.

With that said, some Manx cats have more pliable personalities that can be willing to train or even eager to do so. With plenty of intelligence to boot, Manx cats are overall considered a fairly trainable cat breed.

The key is to remember that cats are sensitive, so positive reinforcement should be used (as opposed to aversion techniques). Rewards, verbal affirmation, and clicker training can all be great methods to work with a Manx cat.

Be sure to provide proper socialization, whether from yourself or professional training, for your cat from the time they are a kitten, if possible. Obedience training should also be core to your routines, while tricks and games can follow.

What types of foods should Manx cats never eat?

It may be tempting to give human food treats, but certain foods we can consume are toxic to cats and should never be given to your Manx.

All cats need some level of activity to stay healthy and fit. Manx cats have a middle-ground temperament between playful and calm, which makes them easy to manage in this regard.

These cats can typically entertain themselves and stay active without too much fuss from their humans. However, a bit of involvement and encouragement is always welcome, especially for such a social and affectionate creature.

Playing with your Manx actively is a great way to encourage physical exercise, provide mental stimulation, and strengthen your personal bond together. Even if your Manx cat has one specific favorite, they may still be playful with others in the family, so give it a try!

They are natural hunters and have a strong prey drive, so chasing mice toys, lasers, or feather wands can be a favorite activity. Puzzle feeders and interactive toys are also recommended for intelligent breeds like this one.

Want to keep your cat active throughout the day while you are gone? Hide treats or favorite toys throughout the house, especially on approved perches, to get your cat climbing. Once they learn to play hide and seek this way (which should be easy), it becomes a much-anticipated event that helps ease the pain of your absence.

Manx at a Glance | TICA

Positive reinforcement training | The Humane Society of the United States