As a majestic dog breed, Great Pyrenees are relaxed and serious. They may not be bubbly like Golden Retrievers, but they have a very deep affection for their owners. As independent thinkers, Great Pyrenees can be stubborn, but their devotion to keeping their family safe shows their loyalty and love. 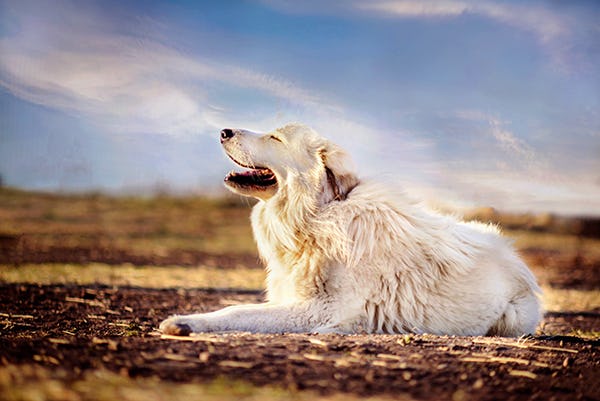 Elbow dysplasia is a condition that can be inherited that affects the elbow joint.

Crackling sounds when the elbow moves, the legs face inwards, but the elbow faces outwards, limping, stiff joints, and reluctance to exercise.

If your pup is overweight, it can throw off your dog’s balance, which makes dealing with elbow dysplasia more difficult. If your dog grows too quickly, it can also harm their joints.

Like elbow dysplasia, hip dysplasia is a malformation of a joint, although this happens in the hip.

If your dog is overweight or grows too quickly, it can worsen the condition. It is possible for your pup to develop arthritis due to hip dysplasia.

Cranial cruciate ligament rupture occurs when the ligaments that hold the knee together and help it function rupture or break, which causes knee issues.

An unwillingness to place weight on the affected foot, usually while the pup is running.

If your pup has had the ligament rupture once, it is more likely to happen in the other knee. Obesity and other conditions like patellar luxation can increase the likelihood of cranial cruciate ligament rupture.

Great Pyrenees are stable, relaxed dogs. They may not like strangers very much, but they won’t become aggressive unless they see signs of danger.

The Pyrenees aren’t a very excitable breed. They are usually very serious, which would have prevented them from exciting the herds they guarded.

The Great Pyrenees might not show affection the same way that other dogs would, but rest assured, they’ll always be happy when you're around.

Great Pyrenees have minds of their own. These working dogs had to make their own decisions when they guarded their herd, so they may not be inclined to accept your input on how to behave.

These Pyrenees dogs are descended from dogs that acted as livestock guardians, so they are prepared to protect their families from any possible threat.

Great Pyrenees have a medium-length, double coat. These large dogs shed about an average amount. When they need to lose their heavy winter coats, they shed more.

No, the Great Pyrenees is not hypoallergenic.

A Pyr’s coat only needs to be brushed weekly since it doesn’t matt or get tangled. They need regular nail clipping, and their ears and teeth should be cleaned often.

Although they are intelligent, these white dogs think for themselves. They are independent thinkers, so they get bored when in training since they see it as useless. However, you should still start training your Great Pyrenees puppy when they are young.

Unless they are hiding in a herd of white sheep, the Great Pyrenees is pretty easy to spot. Their white coats and very large size make them distinctive and majestic. These big dogs are calm and gentle, so they can be great family dogs.

These large pups are well worth the effort and care you’ll need to put into them. Adopting one of these dogs is a big responsibility, so you know that you should do a lot of research before taking on this large task.

As pet parents ourselves, we at Spot Pet Insurance know that taking care of a new dog is difficult. They have to adjust to you, and you need to adjust to them. Hopefully, by providing educational resources like this one, we hope to help you learn about your future pup, so you can help them to adjust and be prepared to adjust yourself.

The Great Pyrenees is worthy of the name, but how did they earn the title? Continue reading to find out.

Also known as the Pyrenean mountain dog, the Great Pyrenees are classified as a giant breed.

Great Pyrenees dogs have white coats meant to thrive in cold weather. It’s the only color their coats come in, and since they have medium-length double coats, they look like giant, fluffy clouds. They generally have medium-sized, dark brown eyes and tend to drool quite a bit.

Great Pyrenees might be big, but that doesn’t prevent them from being adorable. They are gentle and sweet with their family, and they are great with kids, although their size means they should be watched around smaller children, as their size could cause some injuries if play gets too rough.

Where do Great Pyrenees come from?

Great Pyrenees are a very, very old breed. They are descended from white guardian dogs who lived around 10,000 BC. They lived around Asia Minor with nomadic shepherds, and they guarded the sheep against any dangers.

When the shepherds migrated to the Pyrenees mountains in 3,000 BC, they brought their dogs with them, and so the Great Pyrenees dog breed developed in this area bordering both France and Spain. They became very popular in medieval France as dogs that guarded fortresses, and King Louis XIV declared them the royal dog of France in the late 1600s when these flock guardians became extremely popular as chateau guard dogs for the French nobility.

Fortunately, Pyrenees fans discovered that there were still some of the original stock living in the mountains, so breeders were able to preserve the large breed, and we can know the Great Pyrenees of today.

What are the potential health issues for Great Pyrenees?

Great Pyrenees are prone to both elbow and hip dysplasia. Usually, the joint doesn’t form properly as the pup grows, so it begins to cause more pain and discomfort as they get older.

The causes of elbow dysplasia can be different. Sometimes it can be caused because the bones in the joint don’t fuse properly, the cartilage and bone don’t form properly, or some of the bone separates from the rest of the bone.

With hip dysplasia, as the dog grows, the ball and socket of the hip joint don’t form properly, which causes grating in the joint.

While we can’t physically help your dog since we aren’t licensed vets, we want to help you and your pup live the best life, so if your pup has issues that aren’t pre-existing, we can help you cover eligible vet visits if you have a Spot plan. Members also have access to our 24/7 telehealth service powered by whiskerDocs.

How to be the best pet parent for a Great Pyrenees?

A great pet parent is a pet parent that considers their dog’s needs. In order to know what your dog needs, you need to know about them and understand them.

A Great Pyrenees home should take into consideration their size, the time it will take to groom and exercise them, and their training needs, so both you and your pet can live the best life possible.

Are Great Pyrenees easy to train?

Socialization is important for any dog from an early age, but since the Great Pyrenees is a guard dog, they need to learn how to interact with the world without perceiving it as full of danger. By slowly introducing them to new people, places, and dogs while they’re young, you can make sure that your pup doesn’t become antisocial and aggressive.

Pyrenees don’t really see the value in obedience training, but they need to learn basic commands when they’re young, especially since they are such big dogs. They tend to respond best to positive reinforcement.

Classes might help your Great Pyrenees learn necessary commands and allow them to socialize.

Since they are pretty indifferent to commands, they should not be trusted off a leash. They can, however, participate in obedience trials if they have a good foundation from when they are young.

What type of foods should a Great Pyrenees never eat?

The Great Pyrenees isn’t a very active dog, and they have relatively low energy levels. They would live pretty leisurely lives unless something came and threatened their herds. A walk could help them stay fit and healthy. You could also try to get them to compete in cart-pulling if your pup wants to work more.