Noble, loyal dogs from Germany, Doberman pinschers are worthy of respect. Like a rottweiler, German shepherd, or boxer, Dobies (or Dobes) are alert watchdogs with high energy levels, ready to warn and guard their families. Although they are great protectors, Dobermans are sweet and loving dogs. 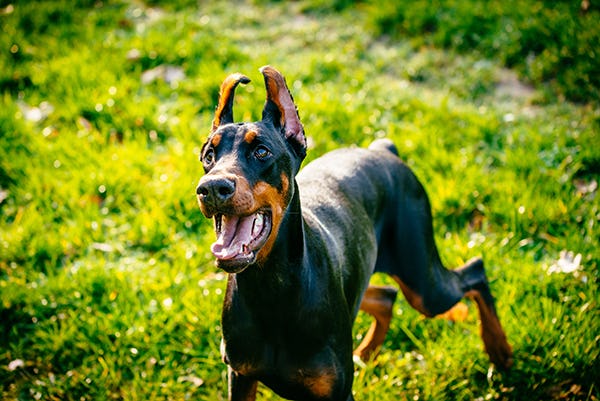 Gastric dilatation and volvulus, commonly referred to as bloat, occurs when your pup’s stomach fills with air, causing pressure to build up and preventing blood from returning to the heart, causing a build-up of blood at the back of the body.

Salivation, pain in belly, retching, but no vomit, restlessness, and enlarged abdomen

Gastropexy, flipping and deflating the stomach

Bloat is more common in dogs that are hyperactive or stressed. It is also better to wait for a bit after your pup eats before taking them out for exercise, as it can increase the chances of bloat.

Wobbler Syndrome is a condition that affects your pup’s nervous system, which prevents your pup from functioning properly.

Symptoms of Wobbler Syndrome include: walking with head down due to pain, unsteady walk, weakness, falling over, and difficulty using all four legs.

Anti-inflammatory drugs, limits on activity, harness instead of leash, surgery

Wobbler Syndrome can be painful, so a lot of exercise might hurt. However, it is also important that your dog get the exercise they need, so it’s best to find ways to balance things out.

Dilated Cardiomyopathy is a heart condition that occurs when the heart and the ventricles in the heart become enlarged.

Symptoms can appear suddenly, but they can also show up slowly over time, so consult a vet if you notice anything out of the ordinary.

Doberman pinschers will be by your side for life, which is why they often serve as police dogs or military dogs. Their families are their first priorities.

Dobermans were bred as protectors, so they are alert and watchful family dogs. They are quick to guard their families if needed.

Dobermans have a lot of energy, so you can expect to get plenty of exercise if you adopt one.

Despite their intimidating appearance, Doberman pinschers are sweet and friendly towards anyone they know and love. They are good with kids, although they are a little big for small children to romp around with, especially since they have a tendency to roughhouse.

The Doberman has a short, sleek coat, but they still manage to shed quite a bit.

No, Doberman pinschers are not hypoallergenic.

Dobermans will need to be brushed weekly, and their teeth and ears should be cleaned regularly. Don’t forget to add nail clipping to your grooming list too.

Dobermans can be stubborn, but they are smart and quick learners. It may be helpful to take them to classes as pups for obedience training and socialization.

Dobermans are one of the dog breeds famous for their work with the police force and military. Their short fur shows off a sleek and powerful build, perfect for a guard dog. Despite the intimidating appearance, Dobermans are very sweet and affectionate dogs with their families.

Dobermans go by many names. In the Americas, they are usually referred to as Doberman pinschers since one of their ancestors was the German pinscher. In most European countries, however, they are called Dobermanns with two ns, since that’s how the name of the first Doberman breeder was spelled.

If you’re thinking about adopting a Doberman pinscher, there are many things you need to consider first. How much attention and time do they need? What are their grooming needs? How much exercise will a Doberman need?

We have the answers to those questions and more here. At Spot Pet Insurance, we think good pet parents should know about their dogs, which means finding the answers to any questions they might have.

By providing educational articles like this one, we hope to help pet parents become the best they can be so that they can live awesome lives with their pets.

The Doberman pinscher is classified as a large-breed dog. These large dogs are strong, quick, and agile, allowing them to better defend their families.

Their smooth, short coats give them very streamlined and efficient air.

The Doberman’s coat usually comes in four different colors. They can also be white, but it’s not an official Doberman color, especially since Doberman pinschers can have a form of albinism, which means they lack the chemical that gives their fur and skin color.

What is the history of the Doberman?

Dobermans have an interesting history. In the late 1800s, a German tax collector by the name of Louis Dobermann, after being met with lots of hostility for collecting taxes, wanted to breed a guard dog that could accompany him while he went from house to house collecting taxes.

He achieved his goal by crossing shepherd dogs with German pinschers, Weimaraner, Manchester terriers, and greyhounds. He was so successful in developing his Dobermann that a breed club was formed in 1899.

In the early 1900s, they made their way to America, where they quickly gained popularity as military, police, and guard dogs. The American Kennel Club (AKC) quickly accepted the Doberman pinscher, especially since their sleek and powerful build made them popular show dogs.

What are the two types of Doberman?

Doberman pinschers are smaller than their European relatives. They are also sleeker, with thinner, curved necks. They have a slightly more elegant air, and they tend to be a bit more laid-back. They are more suited to live with families.

Dobermanns (the European type) are hard workers. They are diligent, and they will get the job done. They are excellent working dogs with greater muscle mass. They are bigger, but their necks are shorter and a bit thicker.

Both Dobermans are excellent dogs; it just depends on what kind of personality you would get along with.

What are the potential health conditions for Dobermans?

While we all hope for the best, your dog can become ill. It could be a passing illness, but there are also possible hereditary illnesses that your dog could inherit from their parents.

Dobermans are prone to bloat. Since they don’t have enough blood circulating, your pup will go into shock. It’s also possible for your dog’s stomach to flip, dragging the pancreas and spleen into this mess. This issue prevents blood from reaching the pancreas, which causes it to release toxins into your pup’s body.

They’re also prone to Wobbler syndrome. It mostly affects the neck region of the spine, so although their head can function, the rest of their body may have issues.

This condition appears primarily in large or giant breeds, like the Doberman or the great Dane, so the cause could be genetic, but the exact cause of Wobbler Syndrome.

Dobermans are also at risk of dilated cardiomyopathy. In this condition, the walls of the heart thin out, so the pressure causes the thinner walls to stretch out.

The thin walls and increased heart size lead to heart failure. Symptoms can appear pretty suddenly, but the condition itself has probably been slowly getting more severe. Once symptoms appear, it usually means heart failure is about to occur, although the timing can vary.

While these issues can be intimidating, most reputable breeders will try to screen their stock so their dogs are less likely to have genetic issues. If you have a plan with Spot Pet Insurance, we can help you cover eligible visits, as long as the condition isn’t pre-existing.

How to be the best pet parent for a Doberman?

Dobermans are dogs that need plenty of exercise, direction, and love. Being the best pet parent means that you need to be sure that you can provide your pet with what they need.

All dogs should be properly socialized, but especially guard dogs. By introducing your pup to new people, places, and dogs slowly when they’re young, you can help them learn how to interact well with others. It also prevents them from becoming antisocial and aggressive towards strangers.

Since Dobermans have strong personalities, they need to be trained from a young age, and you need to be firm with them and consistent with the rules.

Dobermans need to live inside, especially in cold climates, and they should be on a leash or fenced in when they go outside.

Do Dobermans get along with other dogs?

Although Dobermans can get along with other dogs, a dog park probably isn’t a great idea since they tend to bully smaller dogs, and it’s better for them to interact with dogs on a leash.

What type of foods should a Doberman never eat?

Although there are some human foods that a Doberman can enjoy with you, others are toxic to them. Some of these foods are:

Dobermans have a lot of energy, and they need to have plenty of mental stimulation. Hikes or long walks are a great way for your pup to get rid of excess energy, but they’ll also need playtime.

They need a large fenced-in area where they can run around. To keep their minds sharp, you can train them or play games with them.