These small dogs from Mexico might appear little, but in their minds, they are as big and brave as any other dog. Chihuahuas are spirited little dogs who love only one family. Like other small breeds, they love to play, but they prefer to do so with their family members. 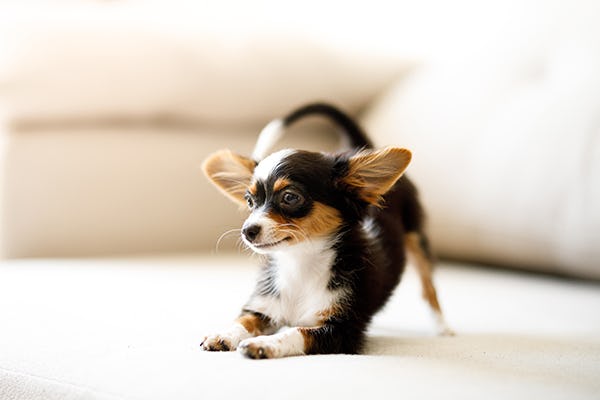 Hydrocephalus is a condition where the fluid normally present in the spinal cord and brain builds up and puts pressure on the brain, which can cause the head to become bigger.

Slow learning, smaller size than their littermates, seizures, pressing their head against a wall, manic walking, and blindness

Medication, surgically placing a shunt to drain off fluid

The disease can cause pain and nausea or just general discomfort.

Pulmonic stenosis is an inherited heart defect that causes the leaflets of the valve on the right ventricle. They are either fused together partially or thickened.

A luxating patella is a kneecap (patella) that moves out of its place (luxate) on the knee.

Skipping (holding one leg up while walking), kicking the leg out, and sudden lameness

Dealing with patellar luxation is more difficult for overweight pets. It’s also a good idea to keep your pet from climbing stairs or jumping onto furniture.

Although they may come off as slightly aggressive, Chihuahuas are ready to challenge and take on any dog that comes their way, no matter their size.

Chihuahuas are usually only one-family dogs. They generally pick one person and will develop the closest bond with that person, ready to follow them as they go about their day.

Chihuahuas have a lot of spunk, which they usually display through their frequent barking. They may be a bit more reserved around strangers, but the Chihuahua will make sure you know that someone’s coming.

After picking their person, Chihuahuas prefer to spend most of their time following their besties around. They are surprisingly willing to hang out on the lap of a loved one.

Chihuahuas might not have high exercise needs, but they love to play and mess around. It’s especially important to teach them tricks or play games with them to help keep their minds in tip-top shape

No, Chihuahuas are not hypoallergenic.

Short-haired Chihuahuas only need to be brushed roughly once or twice a month, but their long-coat relatives should be brushed weekly. Both variants should have their teeth and ears cleaned regularly, and their nails will need to be clipped on occasion.

As any Chihuahua breeder will tell you, these tiny dogs can be stubborn. However, chihuahuas are pretty good at learning, except for when it comes to house training. Praise, positive reinforcement, and a moderate amount of treats can assist in training them.

The Chihuahua is one of the most popular and well-known dog breeds in America. These little bundles of personality are famous not only for their round heads, large ears, and small size but also for their ability to express themselves through barking.

These dogs might bark a lot, but if you are a part of their family, they will love to be around you. If a Chihuahua decides to bond with you, they’d love to sit on your lap or follow you around while you go about your day.

Chihuahuas don’t seem to understand that they’re small. They are feisty and full of bravery, but they can be delicate. Their small size means that roughhousing with small children who might not think to be gentle is out of the question.

Are you thinking about adopting a Chihuahua? Before bringing home one of these wonderful dogs, you should consider whether you and a Chihuahua would fit in well together.

Hopefully, we can help you answer that question today by providing you with information on the Chihuahua breed.

As pet parents ourselves, we at Spot Pet Insurance understand how difficult taking that first step can be. To help prepare yourself for your new furry friend, you need to research the Chihuahua’s personality, wants, and needs. That’s why we’ve provided educational resources like this and other articles to help start you on the path to being a great pet parent.

The history of the Chihuahua

Chihuahuas have a distinct appearance. They often have soft spots called moleras at the tops of their skulls, and they’re one of the smallest breeds out there. Their size is comparable to the Pomeranian, another toy dog that often has lapdog duties.

Chihuahuas are one of the breeds considered to be from the Americas. They are widely considered Mexican dogs. However, although they receive their name from the Mexican state of Chihuahua, it is debated whether their origin is actually in Central or South America.

The other primary theory is that Chihuahuas are the descendants of Chinese dogs that came to the Americas with the Spanish. While we don’t know which case is true, we know that the first historical record of the Chihuahua was in the mid-1800s.

During this time, the Chihuahua was first introduced into the United States. They were called a variety of names ranging from Texas dog to Chihuahua terriers, but the name Chihuahua, without any suffix, stuck.

During the late 1800s, Rosalina Casselli took a troupe of trick Chihuahuas on tour. In 1904, Midget, a short-haired dog, became the first Chihuahua registered with the American Kennel Club.

The Chihuahua’s popularity quickly grew after the rumba king, Xavier Cugat, began to bring his Chihuahuas with him everywhere, including in his films and TV show. The Chihuahua became the third most popular breed in 1964, and they’ve been in the top twenty ever since.

What are things you need to watch out for with a Chihuahua?

Chihuahuas are a feisty breed, although some can be shy. Depending on the personality of your particular Chihuahua, you may need to keep an eye on how they interact with other dogs. A brave Chihuahua can try to challenge much larger dogs without regard for their smaller size.

Chihuahuas also tend to have trouble learning the rules for housetraining, so you might want to be prepared by having extra towels on hand. They can also be stubborn when they’re being trained. Fortunately, praise and food usually work as a bribe.

What kind of exercise and training do Chihuahuas need?

Since Chihuahuas are pretty small, a lot of their energy levels can be used up by just following you around the house or maybe playing an indoor game.

Short walks can be useful to keep their minds active and sharp, though. The outside has many wonderful things they can track, which provides necessary mental stimulation.

You’ve probably seen lots of movies where people carry around their fashionable Chihuahuas inside a purse. Although this may seem like a funny and odd activity to some, it’s actually a great way for your Chihuahua to experience the world without getting too tired out.

Although they are small in body, Chihuahuas have the ego of a much bigger dog. They must be trained properly from a young age. Otherwise, they will end up running the house, and that is not good for either you or your pet. However, they are fairly intelligent, and they want to make you happy, so they can learn pretty well.

It’s important to make sure your Chihuahua gets socialization from an early age. Meeting new people and dogs and going to new places would help prevent your Chihuahua from being too antisocial and aggressive.

Do Chihuahuas get cold?

If you live in a colder climate, it’s best to keep your Chihuahua inside as much as possible. Their small size and short coats prevent them from retaining a lot of heat.

What health concerns are Chihuahuas prone to?

Chihuahuas can become hypoglycemic (have a low blood sugar) if they aren’t fed often enough, especially when they are younger. Ask your vet about potential signs of health issues like hypoglycemia in your pet and how to handle these issues.

Hydrocephalus is also common in this breed. With this condition, your pup might lose their brain’s ability to function properly.

It can cause brain damage, and because of the growth in the head, the bones in the skull can thin out. Hydrocephalus can affect the eyes, causing blindness. The progression of the disease is usually unpredictable, and it can eventually cause death if not treated.

However, it is possible that the disease will stabilize itself. The goal of treatment is to get the fluid to stop building up and potentially drain it, but if the body stops the buildup itself, the condition might not progress.

Pulmonic stenosis is also common in Chihuahuas. These issues can obstruct blood flow to the heart and lungs. If the blood flow is obstructed, it makes it difficult for the lungs or heart to perform their functions properly, which affects the body, since the heart and lungs help to circulate oxygen to the rest of the body.

Patellar luxation is a condition affecting the kneecap of your dog’s leg. It can occur in one or both legs, although two legs is rarer.

There can be many reasons for a luxating patella, like a groove the patella is supposed to fit into being too shallow, abnormal hip joint affecting the knee, malformation of the tibia or femur, or the attachment point for the muscle is off.

The different reasons for patellar luxation can affect the severity of the problem and also the potential treatment.

Spot Pet Insurance members have the benefit of either visiting any licensed vet in the United States and Canada or using the 24/7 telehealth line powered by whiskerDocs. Spot plans cover chronic and hereditary conditions, as long as they aren’t pre-existing, and our plans can be tailored to your needs.

Thinking about your pet getting ill can cause anxiety, but hopefully, knowing what to look for and how to best help your pet makes you feel more at ease and prepared if anything happens.

Chihuahua: An introduction to the breed

Chihuahuas are one of the smallest dog breeds. They are famous for their apple-like heads, big ears and eyes, and small, curled tails.

The most popular variant of the Chihuahua is one with a smooth, short coat, although some Chihuahuas have medium-length fur. Their coats can come in many different colors and with many different markings, although only some of them are part of the AKC standard.

How much grooming do Chihuahuas require?

Your choice of Chihuahua will affect how much grooming you will need to do. Short hairs require very little brushing, although they should be brushed monthly or bi-monthly to keep their coat oily enough.

A long-haired chihuahua will require weekly brushing. Either way, keeping their silky coats clean is a pretty easy task.

They can be very affectionate, but that is usually only with their family, and even then, a Chihuahua usually picks one person to develop a closer bond with. They don’t respond well to strangers, whether humans or dogs and their size makes being around young kids more of a problem than a blessing.

Chihuahua will bark at everything and anything. They have their opinions, and they want to express them. They are pretty good watchdogs since they will warn you of anyone who is trying to approach the door.

The Cost of Chihuahua Puppies & Adult Dogs (with Calculator) | PetBudget