Burmese cats are easy-to-love cats that will love you back with everything they’ve got. Often dubbed “velcro” cats, Burmese are highly social and need to be around their humans as much as possible. Playful, intelligent, vocal, active, and friendly – all traits that make the Burmese a wonderful companion. 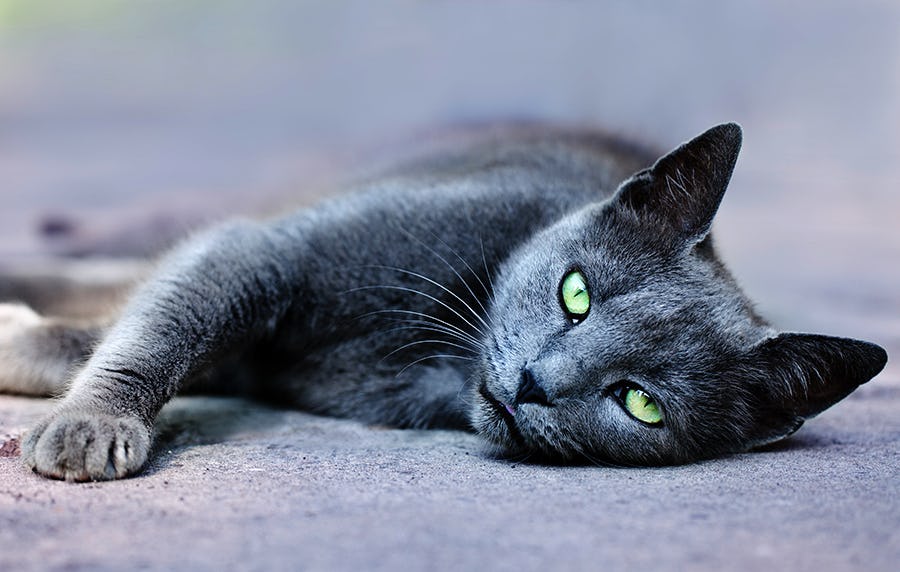 Diabetes is a common condition in humans, but also in cats!

Around 1% of all cats

Diabetes is four times as likely in obese cats.

Hypokalemia, more simply known as low potassium levels, occurs in numerous cat breeds. It is also specific to the Burmese cat breed in a hereditary capacity.

The defining feature of Burmese cats is their love for their family and their corresponding need to be around them at all times.

Burmese cats are a highly playful breed, often compared to dogs thanks to their proclivity for games such as fetch, tag, hide and seek, and more.

Strangers are warmly welcome by these friendly felines, who enjoy being social whenever possible, whether with humans, cats, or even other dogs! The Burmese breed can behave like a lap cat, enjoying cuddles with family members throughout its day.

The Burmese breed is renowned for a high level of intelligence, most often shown in how they play and interact with their humans.

Don’t expect a quiet cat with a Burmese. Like their Siamese and Tonkinese cat relatives, they are frequently vocal, although they express themselves gently.

Burmese cats have a short, dense coat that was once exclusively sable but now comes in a variety of coat colors. These include lilac, champagne, platinum, and blue. Your cat’s coat hue variances will depend on whether your Burmese is of the American or European variety.

Grooming is an easy task for an owner of a Burmese cat, requiring attention to the coat (e.g., weekly brushing) only during shedding season. Dental cleaning and nail trimming should be a regular practice.

Often compared to dogs, Burmese cats are exceptionally trainable amongst feline breeds in areas ranging from obedience to tricks and games. Choosing a cat breed can feel like an overwhelming process due to the sheer number of breeds to choose from.

That’s why we’re here to help. Our Spot Pet Insurance breed guides are designed to make it easier for pet parents to match with the perfect cat breed.

We cover everything from common health conditions and grooming needs to training and exercise tips and more in between.

Today, our attention is turned to the Burmese cat.

With short, silky coats, the Burmese cat is a beautiful sight to behold. Their eye color may range from golden or yellow-green eyes to blue eyes or green eyes.

Even more attractive to many owners is the easy-to-love personality of these medium-sized cats, which some compare to the personalities of many dogs.

These cats are certainly very sociable and playful. Combined with a high level of intelligence, easy training, a good bill of health, and low-maintenance grooming, this could be one of the easiest breeds to mesh with.

Read on to learn everything a new owner of a Burmese cat could need to know!

Where does the Burmese cat breed come from?

As one might guess from the name, Burmese cats come from Burma. It is unknown exactly how far back their origins can be traced – it could be thousands of years. Myths and legends are still tied to the breed’s history in their homeland of Burma (present-day Myanmar), a country on the Indochinese peninsula near Vietnam and Thailand.

What is certain is the more recent history of the breed, tracing back to its true matriarch, a cat named Wong Mau. In the early 20th century, Wong Mau was brought to America by a naval officer named Dr. Joseph Thompson.

Once in the states, Wong Mau was bred with a Siamese cat, and then her kittens were bred back to establish the first generations of the Burmese cat. After a brief scare during which the Burmese breed looked like it might become too diluted to continue, dedicated breeders were able to preserve it and found a lasting standard for the cats we know today.

More recently, Siamese and Burmese parent breeds have been crossed to create a new breed, the Tonkinese or “tonk.” The Tonkinese breed, which originated in Canada with Margaret Conroy, often has a pointed or mink coat pattern and rare aqua eyes.

These striking attributes make purebred Tonkinese kittens, or Tonkins, fairly rare and hard to come by.

What are the potential health conditions for Burmese cats?

Burmese cats have a good bill of health in general but can be predisposed to certain conditions inherited from previous generations.

These conditions include diabetes mellitus and hypokalemia. Hypertrophic Cardiomyopathy can also be hereditary for these cats, as with any breed.

Unfortunately, Burmese cats are especially at risk for diabetes, so owners need to know the signs.

Cats with diabetes are potentially at risk of further health issues, so treatment is required to maintain a good quality of life. Diabetes can not be cured, although some cats go into diabetic remission, in which case they no longer need active treatment (although they should be closely monitored).

Otherwise, treating diabetes is a lifelong process requiring insulin injections every 12 hours. With responsible treatment, a cat with diabetes has a good prognosis for achieving a high quality of life despite the condition.

Cats with hypokalemia have a weakened skeleton, but unfortunately, there are not many other clinical signs, so it can be hard to diagnose. Owners must keep a close eye on their cat’s physical activity to see if they act strangely or have difficulty holding their head and neck in the right position.

Thankfully, this health problem is rarely fatal and can be treated, although the process will likely be lifelong and involves potassium supplements with most or all meals.

The most important step you can take against these conditions is to choose a responsible breeder who only breeds parents who pass health tests to clear them of known genetic diseases. You can request these test results when you look at a kitten, and some shelters might have the info as well when adopting.

Are Burmese cats affectionate with family?

Yes, Burmese cats are highly affectionate animals! The Cat Fanciers’ Association (CFA) emphasizes that they are often classed as “velcro” cats, an endearing term that references how closely they like to stick to their people.

While many owners will enjoy the frequent displays of affection from a Burmese cat, they must not go unrequited. Be sure to spend plenty of time close to your Burmese (in physical proximity) and give them plenty of active attention. Even something as simple as acknowledging them as they play will make them feel happy and noticed.

Be prepared for vocal calls of affection as well. These cats will meow all day long, sometimes to simply remind you they are there and want to be loved. Low purring could be a sign of annoyance, so listen closely!

Burmese cats are considered highly intelligent, although this intelligence does not translate to independence. Some cats are problem solvers and survivors, able to handle the outside world on their own – not so with Burmese. These cats need you all the time and should not be outside unsupervised.

That said, their intelligence can thrive while working with you. Play and training are the two places this most commonly comes into practice. Many owners compare a Burmese cat to a dog in how it trains and plays, often learning to fetch, play tag, or perform tricks.

Do Burmese cats do well with children?

According to The International Cat Association (TICA), families with children can thrive with a Burmese cat in their ranks. These felines love to be cuddled, picked up, and played with, which is often a quality that resonates with children.

Take care to ensure any children who interact with your cat are instructed to respectfully handle a cat. They may want to treat your Burmese like a stuffed animal, and your Burmese may not mind, but it is not invincible.

As always, you should supervise any interaction between a cat and young children.

How are Burmese cats with strangers?

Thanks to their extremely friendly disposition, it's easy to introduce new people to Burmese cats!

Of course, nothing can replace proper socialization. It’s important to introduce your cat, from an early age if possible, to new situations with proper guidance, teaching them how to react when they encounter unfamiliar people, pets, and places. This sets up smooth sailing as your cat grows older.

Even though Burmese cats are naturally friendly and should be easy to train in socialization, it’s still vital that they know how to approach others who may be less friendly or how to react when something unfriendly might come their way.

Do Burmese cats get along with other pets?

It’s easy and often ideal to raise a Burmese cat alongside other animals! They are highly social and will enjoy playmates. Cats are, without surprise, the easiest animals to mesh with a Burmese cat, but dogs can also be tolerated or even befriended.

However, do understand that Burmese cats have a high prey drive in their instincts, leading to problems should you have a pet bird or an animal like a gerbil.

How to be the best pet parent for a Burmese cat

Even the most low-maintenance breeds have their quirks and unique needs. Understanding your Burmese cat is a core part of your responsibility as a pet parent, which is why we’re writing this Spot Pet Insurance guide.

Pet insurance can be another great way to help keep your cat healthy and thriving! Check out our FAQs to learn more, and get a free quote today to see if Spot Pet Insurance could be a good fit for you.

How much does a Burmese cat cost?

Basic training and behavior etiquette for your Burmese cat

You may often hear it said that training a Burmese cat is akin to training a dog. However true this may be, it’s vital to understand that cats will never be dogs exactly. All cats require extra patience and tact during training, and the Burmese is no exception.

Positive reinforcement is your greatest tool in this regard. Using a combination of food rewards, verbal affirmation, and physical affirmation, you can train your cat with positive associations, which are shown to be more effective for cats in general than aversion methods.

Burmese cats, being so friendly and intelligent, are also highly sensitive. Harsh treatment could be unproductive (at minimum) and potentially damaging to your relationship.

Obedience and socialization training should be core to your routines, with tricks, games, and leash walking optional advanced levels.

What types of foods should Burmese cats never eat?

It’s tough to resist giving human food treats to those adorable Burmese cat eyes. Most Burmese will be more than happy to accept whatever you give them!

However, certain foods must be avoided due to their toxicity for cats. Here are some common examples you might find in your home:

Burmese cats have a high energy level and should be easy to keep active, but they want you to participate with them anyway.

Be sure to make exercise and playtime an interactive experience. Not only does this help ensure your cat’s health thrives, but it also strengthens your bonds together!

Burmese cats love toys that exercise their prey drive, such as mouse toys and feather wands. Fetch and similar games can also easily be taught. Burmese pick up on the rules quite quickly!

Hypoallergenic Cats | Am I allergic to my cat? | Blue Cross