These domestic cats from Britain, made famous by the Cheshire Cat in Lewis Carroll’s Alice in Wonderland, are characterized by thick coats, round heads, round eyes, and broad chests.

The domestic shorthairs are equally independent and affectionate, quiet and playful. They enjoy time with family and will entertain without causing mischief. 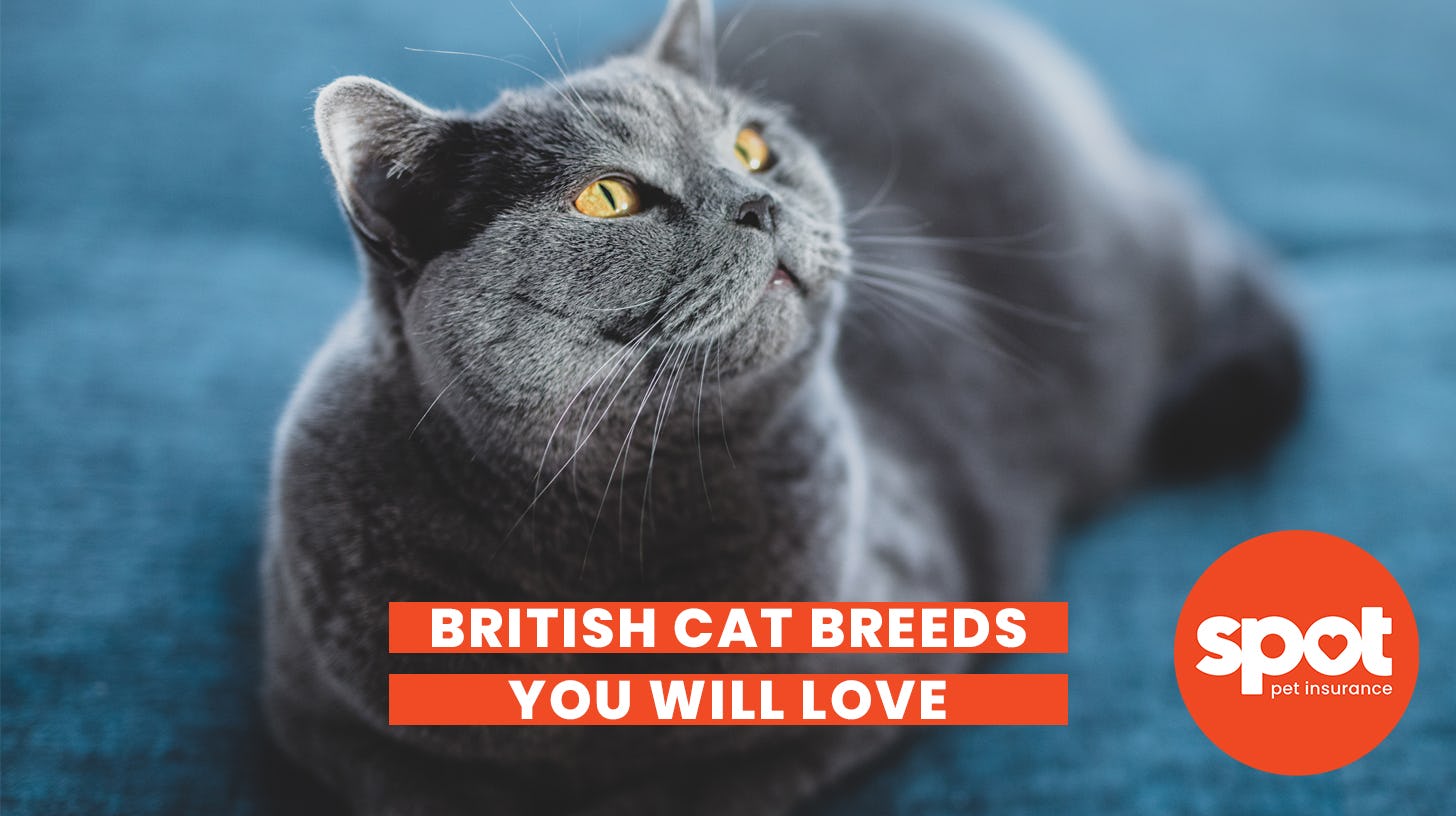 While the British shorthair breed is generally healthy, it can be susceptible to bladder issues, such as urinary tract infections (UTIs).

The severity of UTIs can vary widely, as can the costs of treatment. Simple cases may only run a few hundred dollars over a short time, while severe cases could require many follow-ups or more expensive treatment and often accompany other issues, such as bladder stones.

HCM (hypertrophic cardiomyopathy) is one of the most common conditions in cats, and it is an even greater risk for this breed than others.

HCM is a heart disease which has no known cure. Treatment exists to manage symptoms and hopefully prolong a high-quality life for as long as possible.

Since British shorthairs can be susceptible, it’s crucial to ensure tests that check for HCM throughout their life, starting during the breeding process – so make sure to choose breeders that only use healthy parents.

Cannot currently be cured, but symptoms can be managed

This breed is perfect for families that may not always be home. These cats are happy enough having time to themselves, but also love to be around family when you return.

British shorthairs are calm and laid back most of the time. They won't pester you or cause undue mischief, at all times demanding your attention.

Despite being content alone, this breed is also affectionate with their family. Cuddling next to you is a favorite activity, but don't expect a full-on lap cat.

This breed isn't overly assertive or forward, although temperaments can vary among individuals and between genders (with males generally the more bold). Once a stranger becomes familiar, affection flows freely.

Like a proper Brit, this breed isn't overly talkative. An occasional chirp or meow might express their feelings, including annoyance if they are held too long.

Blue-gray is the standard color for this cat's short, dense coat, but a range of variations can be found. These include bicolor, tortoiseshell, calico, tabby, and more.

No, the British shorthair is not hypoallergenic.

Thankfully, short hair does mean easy to groom, in the case of our British feline friends. Brushing once a week and more during shedding season is recommended to keep the coat clean and healthy, in addition to regular nail trimming and dental cleaning for other hygiene needs.

British shorthairs are moderately intelligent but not particularly eager to please due to their independent nature. Training takes significant dedication and patience but is far from impossible.

This breed can thrive in large homes or small apartments alike. They won't need expansive space to stay fit and happy, and outdoor time should be limited and supervised.

Owning a cat is certainly a privilege, but it’s also a responsibility. For a breed as proper as the British shorthair, it’s only appropriate that a potential owner does their due diligence in providing a high quality of life.

To do so, you’ll have to understand the breed’s needs first. This includes knowing their health predispositions, temperament, instincts, activity level, grooming needs, and more.

With the help of our Spot Pet Insurance breed guides, this research is easier than ever! We bring together the most important information to consider when becoming a pet parent, so you can adopt in confidence.

Today, we turn our attention to the British shorthair.

This breed has a beautiful, diverse range of appearances and a balanced personality.

British shorthairs tend to enjoy a balance of affectionate attention and time to themselves. To a similar degree, they can be active and playful but also enjoy calm relaxation.

Because of their unique and well-balanced temperament, this breed is a favorite of many and fits perfectly into most pet parent homes with ease.

Where does the British shorthair breed come from?

Although British shorthairs did find their breed identity in England, their ancestors came from elsewhere in Europe.

The breed first came to England on the ships of the Romans, who were invading English lands at the time. These ancestors had the job of protecting Roman food stores from vermin, such as rats and mice.

It didn’t take long for the cats to leave these posts and become mixed with local life. Over time their personalities would shift, becoming more inclined toward domestic life and less toward hunting without a close family.

This breed of cat from Great Britain was featured in the first cat show ever at the Crystal Palace in London way back in 1871.

In the 20th century, the breed was mixed with others, including the Russian Blue (to create the British Blue), Persian cat, Siamese, Scottish Fold, and Chartreux. It wasn’t until the 1970’s that the breed we know today became truly established.

Today, British shorthairs are popular worldwide as one of the most well-rounded, easily-adapted breeds.

What are the potential health conditions for British shorthairs?

In general, the British shorthair breed is exceptionally healthy. There all, as with all breeds, some conditions that can be a threat

Most notable of these conditions is HCM (hypertrophic cardiomyopathy), as mentioned above.

Urinary tract infections (UTI), other bladder issues, dental issues, and kidney diseases are also possible for this breed, as with many others.

Obesity is also a very common problem with cats. While British shorthairs aren’t biologically predisposed per se, they are sometimes content with a sedentary lifestyle and may need encouragement to stay active and fit.

Are British shorthairs affectionate with family?

British shorthairs are certainly sweet, loving, and affectionate, but in their own way. The typical means of showing love for a cat are present (including cuddling and greeting or following) but to a limited degree.

Think of their affection as dignified and reserved. When they give it, they mean it. Don’t expect to be constantly smothered by this breed.

Rather, you’re more likely to find a balanced approach. You’ll know your cat loves you when they balance your attention with alone time.

It’s also important that you don’t smother your cat. British shorthairs enjoy being petted and picked up, but not for too long – don’t worry, they will usually show you when it's been too long.

British shorthairs are moderately intelligent cats. Thankfully, they aren’t likely to be opening all the doors in your house or causing mischief. At the same time, training isn’t going to be particularly easy, but this is typical of most cat breeds.

Do British shorthairs do well with children?

Children can get along with this breed just fine, provided everyone’s boundaries are known and respected. It’s important to educate children on how to interact with a cat, including when to back off when your cat has clearly had enough.

How are British shorthairs with strangers?

Due to their rather reserved temperament, this breed doesn’t approach strangers as boldly and excitedly as some others.

Still, strangers can be welcomed warmly and quietly with a gradual introduction.

Do British shorthairs get along with other pets?

As with strangers, proper introductions go a long way. British shorthairs can thrive with pet siblings, including dogs and other animals, but only if their siblings understand how to respect their boundaries. A very high-energy or smothering pet might be a challenge for your cat.

How to be the best pet parent for a British shorthair

There’s a lot to know and be prepared for when it comes to caring for a British shorthair. A core part of the process is learning, which is why we provide additional lifelong learning resources here at Spot Pet Insurance.

For answers to all sorts of common questions and more guides like this one, check out our Blogbowl!

You can also learn more about pet insurance, which is a great way to help ensure your cat's health and safety throughout their lifetime. Check out our FAQs if you have some questions. See if pet insurance is right for you.

Let’s talk about a few more factors that go into parentage for a British shorthair, including costs, training, and exercise..

How much does a British shorthair cost?

Basic training and behavior etiquette for your British shorthair

British shorthairs are naturally well behaved, but training is still necessary and worthwhile.

Socialization is a core type of training for all cats. Since some British shorthairs might be more reserved than others, it's a good idea to start them young and ensure they know how to handle new situations since not everyone will be as quiet and calm as they are.

Although they rarely cause mischief, it can be a bit difficult to instill specific behaviors of your liking into this breed. They are intelligent but also independent and sometimes stubborn.

Always use positive reinforcement with cats, and avoid harsh treatment or punishment. Cats tend to be sensitive.

What types of foods should British shorthairs never eat?

Some foods should never be given to your cat, either due to toxicity or general health concerns. Here are a few common ones:

This breed can be a bit inactive when they desire, which means they might need your help to stay fit and healthy.

Providing lots of infrastructure for play and exercise is a good start. Cat trees and perches can be bought or built, and toys such as play mice, feather wands, lasers, balls, and more can get your cat moving.

Some breeds may be able to leash walk, but this is not an easy task for a British shorthair. Any outdoor time they do receive should be supervised, preferably within an enclosed area.

Human Foods That Are Dangerous for Cats | PetMD