With a nickname like the American Gentleman, expect your Boston terrier to be a well-mannered dog. This popular breed makes an excellent family dog since they are friendly and playful.

These extroverted little dogs love being around people but can be stubborn and a little cocky, especially around other dogs. 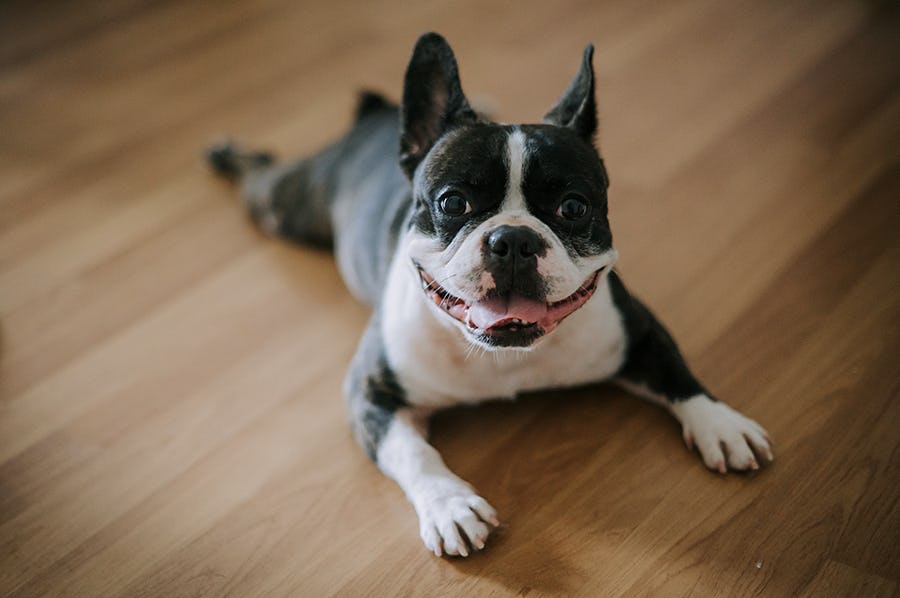 Boston terriers are brachycephalic dogs, which means they have short upper jaws and short muzzles. Since they have extra tissue, it takes up space that would normally allow for airflow, which causes breathing problems, and may snort or drool.

Most brachycephalic dogs get overheated easily in hot and humid weather. The difficulty breathing also makes exercise more difficult, so make sure your pup doesn’t overexert themselves. Being overweight can also make this condition worse.

Patellar luxation is a condition where your dog’s kneecap (patella) dislocates itself (luxates).

If your pup is overweight, it can be more difficult for your dog to handle patellar luxation. It can cause arthritis (inflammation of the joint), which can progress to other areas.

Boston terriers love to spend time playing with their family. It’s one of the reasons why they’re so great with kids, although they may need a break every now and then.

Boston terriers love being around people, and they want someone to be with them to help them stay busy. These friendly companion dogs can’t wait to meet new friends.

Boston terriers are loving dogs. They love meeting new people, but their families come first and foremost in their puppy hearts.

Boston terriers can be pretty spirited and stubborn at times, and they might try to show off when they're around other dogs. Some Boston terriers are a decent watchdog, letting you know when someone is waiting at your door.

Boston terriers are good learners, but they tend to be sensitive, so don’t be too hard on them. 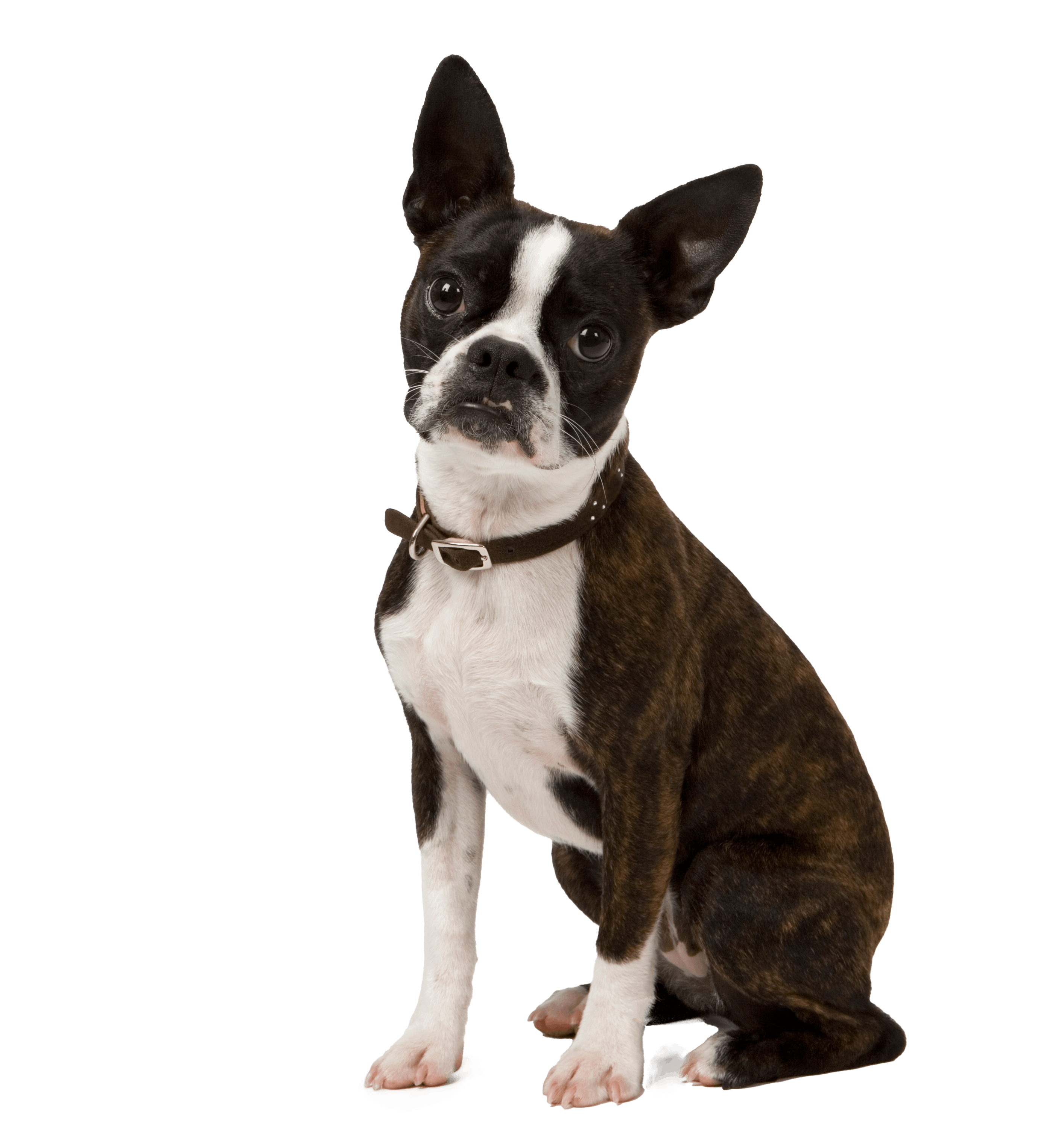 Boston terriers are one of the most famous small dog breeds. Their sweet and friendly character makes them great companions. Their small stature and moderate energy level make them great for city living, but they could live pretty much anywhere, as long as they can live inside.

Boston terriers have erect ears and a compact body, and like all dogs, they require proper socialization. If you’re thinking about adopting a Boston terrier, you’ll want to learn the ins and outs of this breed, so you can be prepared to take care of them.

At Spot Pet Insurance, we understand that adopting a new pet is a huge, lifelong responsibility. As pet parents ourselves, we’ve learned that it’s best for us and our pets to research the breeds that we want to adopt so we can provide our pets with the best care possible.

Fortunately, you’re on the right track. The first step to being a great pet parent is learning about your pet. Are you ready to learn more about the Boston terrier? Continue reading.

Boston terriers are small dogs. They are great dogs to have if you live in an apartment in the city because of their size and people-loving nature. An all-American dog breed, a Boston terrier, sometimes called a Boston bull terrier, is a cross between white English terriers and bulldogs.

Boston terriers are sometimes called the American Gentleman, not only because of their wonderful personalities but also because of their tuxedo-like coat pattern that can come in black, brindle, or seal.

This feature wasn’t actually part of the breed standard until the early 1900s. Before that, color and markings didn’t matter.

With their playful attitude, it’s no wonder the Boston terrier was named the mascot of Boston University and the official dog for the state of Massachusetts.

The Boston terrier has a coat that is short and smooth. They don’t shed very much, but they still need consistent grooming.

Where do Boston terriers come from?

Although their name gives away their place of origin, their history is still fun to learn. The father of the Boston terrier breed was part English terrier and part bulldog. The coachmen of Boston bred their employer's dogs together so that they could have their own pups, and one pairing resulted in the first Boston terrier.

Judge, the father of the breed, was slightly bigger than the Boston terriers we know and love today. There may have been some later mixes with small breeds like French Bulldogs.

The breed was well-established by the late 1880s, and they already had their own club. Fanciers of Boston terriers hadn’t quite decided on a name for the breed. Initially, they were called bull terriers, but the bull terrier was already a breed at that point.

One of the other name options was roundheads, but Boston terrier became the name of choice. In 1893, the American Kennel Club (AKC) Boston terriers as an official breed, which is one of the shortest periods between the foundation of the breed and their acceptance by the AKC.

What are the potential health issues for Boston terriers?

Since these dogs have more difficulty breathing, it can also cause other health problems that restrict the airways even more, similar to what you would find in pugs or bulldogs.

They are also prone to patellar luxation. The kneecap usually rests in a grove (the trochlear groove) in the femur (the upper bone in a dog’s leg). As the leg moves, the kneecap is supposed to move up and down the groove.

Although it’s not something we like to think about, it’s important to be prepared. Spot Pet Insurance members can have access to 24/7 telehealth services powered by whiskerDocs. We can also help you cover eligible visits to licensed vets across the United States and Canada.

How to be the best pet parent for a Boston terrier?

Boston terriers are friendly and devoted dogs who deserve the best care their family can provide.

Even though Boston terriers are very social dogs, they need to be socialized while young. This means introducing them to new people, places, and dogs gradually as they get older. If you keep them isolated, they can become antisocial and aggressive.

Boston terriers do well with gentle correction and warmth and praise after they correct their behavior. They are sensitive, so they may sulk if corrected harshly. Treats are an excellent training aid.

What type of foods should a Boston terrier never eat?

Although there are many human foods that you can enjoy with your pup, some foods are toxic for dogs to eat and should be avoided. Some of the foods that could be toxic for your Boston terrier are:

Most Boston terriers prefer to exercise with you. They aren’t very interested in independent play, but they love to play a vigorous game of fetch. They also enjoy going for walks with you, but you should keep them on a leash, so they don’t go off exploring.

If you just let them out into the yard, they tend to wait by the door for you to let them in. Boston terriers want to play with you.

At What Age Do Boston Terriers Calm Down? | Terrier Hub

Collapsing Trachea in Dogs: Everything You Need to Know | PetMD