The American shorthair is a strong, rugged breed that can adapt to almost any family and lifestyle. These cats are friendly and easy-going, with a balanced temperament that can be happy with attention or alone. 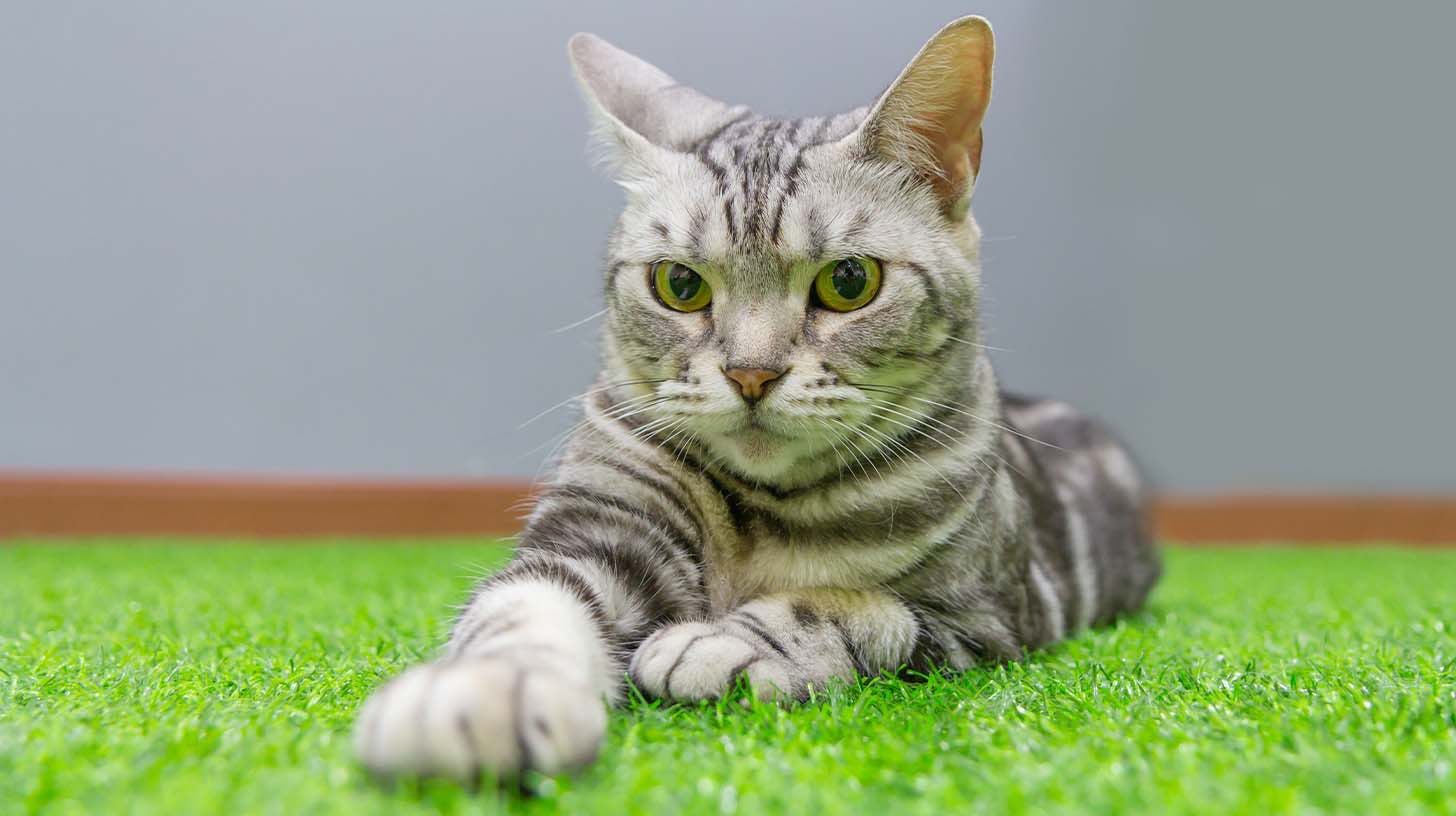 Hip dysplasia involves a malalignment of the hip joint(s), causing a painful grind between the ball and socket.

The possibility of surgery depends on numerous factors. Surgery is less often suitable for older cats.

Around 1% of all cats

Diabetes is four times as likely in obese cats.

American shorthairs find what may be the perfect balance in many of their traits.

These cats are quite friendly with everyone they meet – both human and animal.

American shorthairs have a mellow, laid-back demeanor, going with the flow and rarely demanding much special maintenance.

This cat breed has a high level of intelligence that makes them a good fit for training and good partners during play.

They aren’t quite lap cats, and they certainly aren’t clingy “velcro” cats, but American shorthairs do show plenty of affection to their family.

The American shorthair’s coat is short and dense, capable of withstanding moderate cold temperatures but still holding up in warmer seasons. The many different colors of American shorthairs include silver tabby, brown tabby, calico, bicolor, tortoiseshell, and cameo are also possible.

American shorthairs can be independent and strong-willed, but they are also intelligent and social. Training is possible, but they aren’t always the most eager. 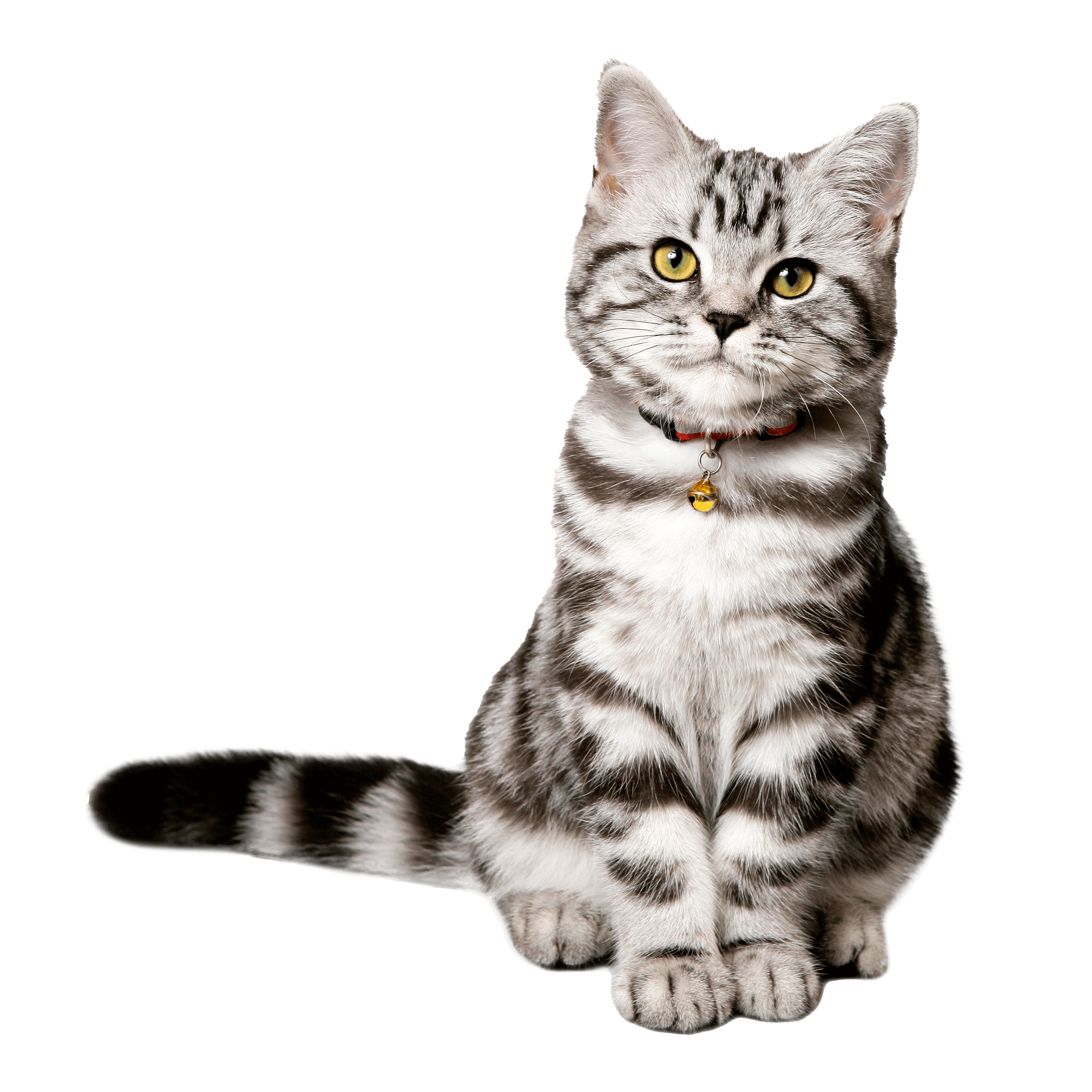 When it comes to choosing the right cat breed for you, it can often be a game of compromise. Affectionate cats are often clingy and needy, while independent cats may not show enough love for us to feel valued as pet parents.

Likewise, playful cats can sometimes be too much to handle, but cats who never want to play or interact can be disappointing for those who want that kind of companion.

Few cat breeds find a temperament as ideally balanced as the American shorthair. If you’re looking for a low-maintenance, easy-to-please cat breed that can adapt to almost any situation, this could be your breed!

With today’s Spot Pet Insurance breed guide, we’re going to cover everything you need to know about American shorthair cats.

With a short, dense coat and compact, athletic body, the American shorthair is a breed built to withstand some of the harsher conditions in America, yet perfectly suited for domestic pet life.

A medium-sized cat, the domestic shorthair is friendly, social, intelligent, playful, and mellow. Single people, families, and seniors alike can thrive with an American shorthair in their lives.

Nonetheless, there are some unique concerns to know about with this breed before bringing one into your family. Read on to know more!

Where does the American shorthair breed come from?

While the name denotes an American origin, the ancestors of these cats — the British shorthair — actually come from Europe!

Riding the Mayflower with the pilgrims from Europe to North America in the 17th century, the ancestors of this breed caught mice and rats and protected food stores.

Once in the new world, these working cats would continue to be employed in vermin control for a few centuries while gradually winning over the hearts of families and becoming domestic cats.

As the Cat Fanciers’ Association (CFA) became organized around the turn of the 20th century, the American shorthair was party to the earliest registration and cat shows.

Today, American shorthairs are rarely used to catch rodents but instead thrive as a classic all-American cat: one of the most popular breeds of cat in the world.

What are the potential health conditions for American shorthairs?

American shorthairs are an extremely hardy cat breed with little in the way of potential genetic conditions and health problems.

There are, of course, certain conditions that can affect any breed, such as heart disease, hypertrophic cardiomyopathy, and hip dysplasia. Diabetes mellitus can also be a problem for these cats.

Despite potential conditions, most American shorthairs have a long life expectancy of 15-20 years, or even longer in some cases.

Responsible breeders test potential parents before breeding so that kittens do not inherit potential health problems.

Are American shorthairs affectionate with family?

American shorthair cats are affectionate, but to a balanced degree (as we see with most of this breed’s traits).

They show love physically by cuddling, playing, and nudging, but they won’t demand constant attention. Likewise, vocal displays of affection are subtle and infrequent but sweet and endearing when they occur.

Those who are not capable of devoting all their time and attention to a cat may appreciate this breed's independent yet loving temperament. Since these cats are happy with a quick cuddle followed by some alone time, you can be too!

Hunting cats are often intelligent, and American shorthairs are a great example. Having been bred and raised to hunt mice and rats for generations, this breed still maintains those instincts and the necessary cleverness to go along with it.

As such, these cats are quite capable of being trained. However, they may not be the most willing participants due to their independence.

Do American shorthairs do well with children?

Despite being natural-born hunters, American shorthair cats also have the sense and temperament to be gentle and friendly towards children. This makes them an excellent fit for families!

Of course, we shouldn’t simply let our children loose on our cats and expect the felines to babysit. Interactions should always be supervised, and there are certain things to keep in mind.

The first is the socialization of your cat. From a young age, cats need to have guided exposure to new people, places, and other pets. This helps them develop a familiarity with more situations and a habit of responding to new things properly.

Once socialized, an American shorthair should be easy to encounter for any child. Still, we should train children in how to approach cats properly.

Notably, American shorthairs prefer to be on the ground, although they are tolerant of being picked up (a favorite activity of many children). Since they are so smart, these cats can also enjoy playing with kids who might want to toss around a felt mouse toy or wave a feather wand.

How are American shorthairs with strangers?

With proper socialization, American shorthairs are also incredibly friendly with strangers. They may not seek out social interaction at every chance they get, but they aren’t usually skittish, reactive, or timid – rather being confident, bold, and sweet when they meet others.

Do American shorthairs get along with other pets?

Living with other pets can be a good situation for American shorthairs, provided the sibling has a similar demeanor.

Remember that this breed has one of the strongest prey drives in the world of domesticated cats. As such, smaller pets such as birds, mice, hamsters, or gerbils are not recommended.

How to be the best pet parent for an American shorthair

Caring well for an American shorthair kitten or cat is a responsibility that starts with understanding. Only with the right knowledge can you meet all of your American shorthair’s needs, avoid health issues, and give them a high quality of life.

At Spot Pet Insurance, we’re here to help! Of course, our breed guides are a great way to get started, but there’s so much more on offer as well in our Blogbowl. Check it out to learn about common cat health questions, find pet parent lifestyle ideas, and more!

You can also learn about pet insurance through our FAQs. To see if Spot Pet Insurance is a great fit for you, get a free quote and check out our insurance comparisons today.

Before we wrap up this guide, there are a few more things you should know about American shorthair cats.

How much does an American shorthair cost?

Basic training and behavior etiquette for your American shorthair

American shorthairs have a high level of intelligence and moderate social temperament that makes them capable of training, though not exceptionally so.

Don’t expect a cat (of any breed) to be trainable quite like a dog, as cats tend to be more independent, preferring to do things their own way.

However, with the proper technique, you can get your cat willing and even eager to train with you! Using positive reinforcement and rewards, your cat will learn that training is a positive time where they can get rewards and build a bond with you.

Obedience should be your priority, with socializing practices equally vital. Once obedience training is mastered, it might be possible to teach an American shorthair tricks, but this is highly individual dependent and won’t work out for every cat.

What types of foods should American shorthairs never eat?

Certain human foods should never be given to cats, as they present dangerous toxicity. Here are a few common examples that humans often consume but which should be kept away from your American shorthair:

The right cat food is important to preventing obesity in cats, but so is plenty of exercise and playtime. Thanks to their balanced temperament between active and calm, these cats are very easy to keep fit and well-exercised.

Most of the time, your American shorthair will manage their physical fitness on their own simply by playing and exploring throughout the day. This is a naturally athletic cat breed with a high prey drive, meaning they like to occasionally chase things, simulate a hunt with a toy, or climb to a good perch to observe the world, scanning for prey.

These cats are intelligent and may enjoy puzzle feeders or hide and seek games as well.

Hypoallergenic Cats | Am I allergic to my cat? | Blue Cross

American Shorthair at a Glance | TICA

How to Socialize Your Kitten | PetMD

Positive reinforcement training | The Humane Society of the United States